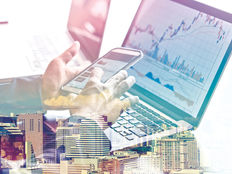 Purveyors of financial technology, widely known as fintech, are causing seismic disruption in the financial services world. That’s good news for borrowers, customers, investors and more. However, traditional banks are vulnerable unless they evolve with the times.

One of the ETFs with which to capitalize on those themes is the ARK Fintech Innovation ETF (ARKF). ARKF invests in equity securities of companies that ARK believes are shifting financial services and economic transactions to technology infrastructure platforms, ultimately revolutionizing financial services by creating simplicity and accessibility while driving down costs.

“LendingClub Corp.’s announced the acquisition of Radius Bancorp Inc. is an appealing ‘short cut’ for fintechs looking to become a bank, but it could be the more expensive option, according to industry experts,” reports S&P Global Market Intelligence. “Alternatively, fintechs could follow in the steps of Varo Money Inc., which applied for its own charter and recently received approval for deposit insurance from the Federal Deposit Insurance Corp.”

“Bank charters are attractive because they enable the offering of deposit insurance, and retail deposits tend to be among the most affordable funding sources available,” according to S&P Global Market Intelligence. “Nationally chartered banks are also able to operate across state lines without undertaking a cumbersome state-by-state registration process. To solve these issues, fintechs such as Varo Money and LendingClub have so far relied on partnerships with banks such as The Bancorp Inc. or Cross River Bank.”

As a result, there’s bound to be more consolidation in the fintech arena as bigger banks look for quick entries into this growth frontier.

Smaller ARKF holdings that are profitable, aren’t overly valued or both could make for compelling targets for traditional banks looking to bolster their fintech footprints. And without takeovers, fintech firms still avenues to make moves of their own.