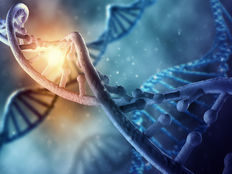 The ARK Genomic Revolution Multi-Sector Fund (ARKG ) jumped more than 12 last week, but that’s not the only fun fact about the genomics ETF. Somewhat quietly, ARKG is flirting with its 52-week high.

ARKG includes companies that merge healthcare with technology and capitalize on the revolution in genomic sequencing. These companies try to better understand how biological information is collected, processed and applied by reducing guesswork and enhancing precision; restructuring health care, agriculture, pharmaceuticals and enhancing our quality of life.

“Iovance (IOVA) closed up approximately 17% on Tuesday after it announced that it will present data on its Phase 1 Study Combining Tumor-Infiltrating Lymphocytes (TIL) and Nivolumab in Non-Small Cell Lung Cancer,” according to ARK Invest. “The presentation will take place at the American Association for Cancer Research (AACR) Virtual Annual Meeting on April 28.”

“Pluristem (PSTI) closed up approximately 15% on Wednesday following news that it had treated seven severely ill patients with COVID-19 in Israel with its allogeneic placental expanded (PLX) cells, with a survival rate of 100%,” notes ARK Invest. “It has treated at least one patient in the United States as well.”

ARKG is up 11.61% year-to-date, topping the NASDAQ Biotechnology Index by more than 800 basis points. Over the course of 2020, story names such as Teladoc Health (NASDAQ: TDOC) and Illumina, Inc. (ILMN), among others, are taking turns lifting the ETFs, but as last week shows, the fund’s lineup is versatile.

ARKG’s Teledoc exposure underscores the benefits of the fund’s active management style. As a mid-cap stock in a sector dominated by large-cap names, it’s not surprising that many traditional index-based healthcare features scant Teledoc exposure. However, ARK’s management team found an opportunity with the name, making it ARKG’s ninth-largest holding.