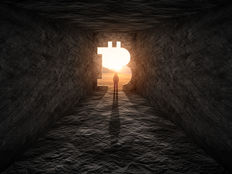 Is This Time Around Different for Bitcoin?

Bitcoin is soaring, stoking old memories of 2017, a run that gave way to a spectacular decline the following year. However, some market observers believe outcomes will be different this time.

The idea of decentralized currencies goes far beyond bitcoin and Ethereum. Today, all kinds of companies, organizations, and governments are exploring the concept of initial coin offerings, or ICOs.

Businesses and currencies exist for roughly the same purpose: to facilitate the exchange of value. Fiat currencies like the U.S. dollar are positively primitive compared with the promise of blockchain and the emerging token economy, which some technologists have taken to calling an asset operating system.

“The price of bitcoin is undergoing a parabolic price rally. As bitcoin nears its all-time high—$19,800, reached on December 17, 2017—we took a closer look at how the current rally compares to the days leading up to its previous peak, and we believe that there are notable differences,” writes Gabor Gurbacs, VanEck director of digital assets. “While the 2017 bitcoin rally was driven by higher volumes, likely due to retail demand, the 2020 price rally so far has been driven by lower volume. We believe the 2020 rally is driven more by institutional allocation and that investing in bitcoin has become less speculative in nature, which indicates bitcoin’s increasing status as a store of value and suggests further potential adoption.”

Should You Bet on 'Digital Gold'?

Bitcoin has sometimes been referred to as “digital gold,” with supporters suggesting it could be a good safe-haven investment. However, the cryptocurrency has tended to trade closer to equity markets in recent times and has been plagued by massive volatility, which has either made investors fortunes, or crushed them.

Integral to the case of expanded acceptance and use of digital assets is conveying value properties to investors. This can be by measuring intrinsic or monetary value. Bitcoin represents freedom at a time when so many governments are actively increasing capital controls.

“The payments front, we note that the current rally is supported by PayPal’s launch of a new service enabling bitcoin and digital asset buying and selling to its network. PayPal services 26 million merchants and 346 million clients globally. SoFi, Robinhood and other major financial companies offer similar solutions. Banks are also looking to offer bitcoin exposure to compete with fintech offerings in order to retain and grow client-base,” notes Gurbacs.