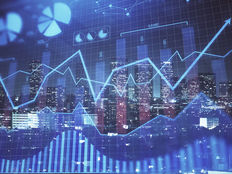 Adding to the market momentum, better-than-expected profits and revenue from Morgan Stanley (NYSE: MS) helped maintain the optimism over fourth quarter earnings. Tom Stringfellow, president and chief investment officer at Frost Investment Advisors, argued that the healthy results out of some of Wall Street’s biggest banks may be a positive signal for the rest of the earnings season ahead, the Wall Street Journal reports.

“It can be a barometer of economic stabilization,” Stringfellow told the WSJ.

Positive economic data also added to the market. For example, U.S. retail sales rose at a steady pace in December to close out the holiday shopping season. Additionally, the number of Americans applying for first-time unemployment benefits dipped last week and was still at historically low levels.

Looking ahead, Christopher Iggo, chief investment officer for core investments at AXA Investment Management, argued that investors will be looking for a recovery in corporate earnings in future quarters as the phase-one trade deal takes effect.

“We’re trading at quite rich valuations,” Iggo told the WSJ. “You need those earnings to come through to justify the current valuations.”

“Over the past year, the uncertainty and the concern over what was going on between the U.S. and China was driving headlines that were absolutely coming into the markets,” Terri Spath, chief investment officer at Sierra Investment Management, told the WSJ. “The fact that there’s productive motions forward, and that is now confirmed, is certainly taking away that risk that was weighing on the market.”

According to FactSet estimates, S&P 500 companies are expected to show a 2.3% drop in earnings in the fourth quarter year-over-year, but analysts are projecting earnings growth to pick up in the first quarter.