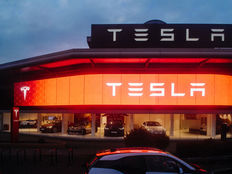 Yes, Tesla Battery Day May Be a big Deal

Following its highly anticipated stock split, Tesla tumbled last week as some high-flying growth stocks retreated, weighing on the ARK Autonomous Technology & Robotics ETF (ARKQ ) in the process. However, Tesla and ARKQ, which has one of the largest weights to the electric vehicle maker, can get their respective grooves back,

There’s an imminent catalyst on the way: Tesla Battery Day on Sept. 22. Among the issues that could be discussed at the event are battery costs and density, both of which are vital to the Tesla investment thesis.

“Tesla’s battery cost structure to be a focus of the event, and we believe that reducing pack cost to less than $100 per [kilowatt-hour, or kWh] is a key metric for investors,” notes Goldman Sachs analyst Mark Delaney.

ARKQ seeks long-term growth of capital. The fund is an actively-managed fund that will invest under normal circumstances primarily in domestic and foreign equity securities of autonomous technology and robotics companies that are relevant to the fund’s investment theme of disruptive innovation. Most of the fund’s assets will be invested in equity securities, including common stocks, partnership interests, business trust shares, and other equity investments or ownership interests in business enterprises.

Earlier this year, Tesla CEO Elon Musk pointed out the company could produce 400 watt-hours per kilogram (Wh/kg) batteries with high cycle lives in three or years.

“Improvements in energy density – more energy per unit of raw material – enable battery cost declines and unlock performance that varies by use case,” according to ARK Invest research. “A reduction in weight and friction might add a dozen miles to the range of an EV, for example, but roads provide most of its support. Roads offer no support for planes in flight, so battery breakthroughs enabling electric flight could be game-changing.”

Adding to the Tesla case, the company said earlier this year the battery range on the popular Model 3 S is now 402 miles. Increased range is crucial in driving higher adoption of electric vehicles because simply put, fears of running out of charge have kept some buyers out of the market.

“400 Wh/kg (batteries) in three to four years would be consistent with the pace of improvements in battery energy density during the past 30 years,” notes ARK.