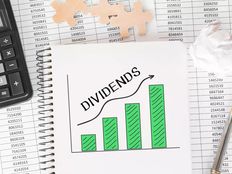 The Federal Reserve said Wednesday it would raise interest rates in addition to penciling in further rate increases this year to combat inflation, which has continued to swell and has reached four-decade highs.

Fed officials have decided to raise the benchmark federal-funds rate by a quarter percentage point to a range between 0.25% and 0.5% from near zero. Most of the Fed officials projected pushing it up to at least pre-pandemic levels, which would be consistent with raising interest rates at every scheduled meeting this year.

Rising rates can have a disproportionate effect on certain market sectors. While growth stocks haven’t been consistently worse performers than value stocks during periods of rising rates, they’ve been hit particularly hard during the recent spike in interest rates due to their substantially higher valuations at the outset of recent market volatility.

Value-oriented stocks and ETFs have held their ground so far this year while the broad market has fallen, which has encouraged investors to rotate away from growth ETFs and stocks in favor of high dividend-yielding investments, moving into sectors such as financials and energy.

A dividend ETF offers income and capital appreciation, in addition to generally being viewed as less risky than other investments.

The companies paying dividends are often mature firms — though some can be quite small — that have mastered their business, made the essential investments, and now generate more money than they have a meaningful use for.

Looking at the nine-year record for all global equity income and global large-cap core ETFs and open-end funds, sorted by nine-year Sharpe ratio, the SmartETFs Dividend Builder ETF (DIVS C+), managed by Guinness Atkinson Asset Management at the top of the pack.

The only fund with a higher Sharpe ratio over a nine-year period, as of the end of January, is the Morgan Stanley Global Franchise Portfolio (MSFAX), a mutual fund; however, where DIVS beats MSFAX is in consistent return over a five-year period.