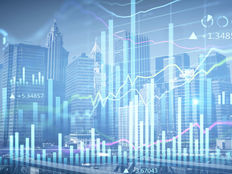 At the sector level, that’s easily accomplished with consumer staples. While tech was getting pounded yesterday, the Consumer Staples Select SPDR Fund  XLP traded higher, running to an all-time high while extending its one-week gain to nearly 5%. It’s possible that the good times could continue for the sector.

“Consumer-staples stocks have raced higher recently, indicating that investors are seeking to defend themselves against market volatility. It looks like shares in the sector are poised for more strong performance, at least in the short term,” reports Jacob Sonenshine for Barron’s.

XLP, one of the largest consumer staples exchange traded funds, looks to provide investment results that correspond generally to the price and yield performance of publicly traded equity securities of companies in the Consumer Staples Select Sector Index, which includes securities of companies from the following industries: food and staples retailing, household products, food products, beverages, tobacco, and personal products.

Interestingly, XLP is grinding higher even as market participants price in multiple interest rate hikes by the Federal Reserve in 2022.

“The strength in consumer-staples stocks continued even after Wednesday’s news that most policy makers at the Federal Reserve expect three interest-rate increases in 2022, up from the prior forecast of two. The staples fund gained 1.1%, keeping pace with the Dow Jones Industrial Average according to Barron’s.

While conventional wisdom often dictates that staples are vulnerable to higher interest rates, the opposite could prove true next year as investors look for stocks with quality earnings and dividends as higher rates could pinch economic growth.

“Interest in these stocks has emerged anew because higher interest rates could slow down economic growth—a setback for industrial companies and those that sell discretionary goods. Demand for staple goods holds up better when people cut their spending, so companies in the business tend not to see as large a hit to sales and earnings in harder times,” according to Barron’s.