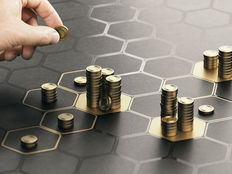 Dividend ETFs Worth Considering as JPMorgan Saves Up

Dimon said at a press conference on Monday that JPMorgan Chase has been “effectively stockpiling” cash rather than deploying it to purchase Treasuries or other investments as potentially higher inflation will force the Federal Reserve to boost interest rates.. The massive U.S. bank has positioned itself to benefit from climbing interest rates, which will let it buy higher-yielding assets, he said.

“We have a lot of cash and capability and we’re going to be very patient, because I think you have a very good chance inflation will be more than transitory,” said Dimon, the longtime JPMorgan CEO.

“If you look at our balance sheet, we have $500 billion in cash, we’ve actually been effectively stockpiling more and more cash waiting for opportunities to invest at higher rates,” Dimon said. “I do expect to see higher rates and more inflation, and we’re prepared for that.”

There is much debate as to how long inflation is likely to last, with economists from Deutsche Bank claiming it could be longer than many would anticipate.

While other financial pundits see a more ephemeral pop in inflation, Deutsche issued a serious warning that concentrating on stimulus while dismissing inflation fears could be detrimental if not in the near term then over the next several years and beyond.

The bank’s analysis especially blames the Federal Reserve and its new loose monetary policy, which will tolerate higher inflation for some time to allow for a full and comprehensive economic recovery.

“The consequence of delay will be greater disruption of economic and financial activity than would be otherwise be the case when the Fed does finally act,” Deutsche’s chief economist David Folkerts-Landau wrote. “In turn, this could create a significant recession and set off a chain of financial distress around the world, particularly in emerging markets.”

The Fed has claimed it won’t increase interest rates or limit its asset purchase program until it sees “substantial further progress” toward its inclusive goals, which a number of Central bank officials suggest are not within reach as of yet.

The Deutsche team believes this is the wrong approach, and that aggressive stimulus and fundamental economic changes will catalyze higher inflation that the Fed will be potentially unable to address.

“It may take a year longer until 2023 but inflation will re-emerge. And while it is admirable that this
patience is due to the fact that the Fed’s priorities are shifting towards social goals, neglecting inflation leaves global economies sitting on a time bomb,” Folkerts-Landau said. “The effects could be devastating, particularly for the most vulnerable in society.”

In addition to traditional vehicles like gold, investors who are concerned about inflation can consider dividend ETF strategies.

Both the consumer price index and the producer price index have increased faster than expected, weighing on broad swathes of both the equity and fixed income markets and contributing to the heightened volatility in recent weeks. Many fear that high inflation will force the Federal Reserve to cut back on its accommodative momentary policies and hike interest rates sooner rather than later. With higher rates, the current value of future profits is reduced, which drags on stock valuations.

However, dividend-paying stocks have outperformed non-dividend payers as traders adjust to a potentially rising inflation environment. According to Evercore data, there is a close correlation over the last decade between inflation expectations, the 10-year Treasury yield, and the relative performance of high-dividend stocks, Barron’s reports.

The investment bank’s data indicated that if expectations for inflation and bond yields are both high enough, dividend-paying stocks can keep outperforming low payers.

Meanwhile, for investors looking for a potential hedge against inflation, the Quadratic Interest Rate Volatility and Inflation Hedge ETF (IVOL) is also a fund to consider.

“While the surge in inflation over the past year was driven in part by base effects, given last year’s economic lockdowns, we are seeing prices rise for all sorts of things, like lumber, auto parts, semiconductors, groceries and gasoline,” said Nancy Davis, founder of Quadratic Capital Management.

“I expect inflation data to remain elevated over the coming months, given the widespread reopening of the economy, shortages or delays in many manufactured goods and a dovish Federal Reserve that is willing to let inflation run above its 2% target,” Davis added.