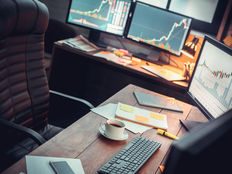 With Dividends Firming Up, Revisit ETFs

It was a rough first half of 2020 in terms of dividend cuts and suspensions, but things perked up in the third quarter, shining a light on the benefits of exchange traded funds, such as the Invesco Dividend Achievers ETF (PFM A-).

PFM, which yields 2.09%, is higher by nearly 19% over the past six months. The $433 million PFM is more than 15 years old and follows the NASDAQ US Broad Dividend Achievers. That benchmark requires member firms to have dividend increase streaks of at least 10 years.

“As yield-paying companies recover from the coronavirus slowdown that led many of them to cut their payouts earlier in the year, investors may be wondering whether the dividend trade is yet safe,” reports Lizzy Gurudus for CNBC.

Due to its emphasis on payout growth rather than high yields, PFM is a safe idea for investors looking to revisit dividend stocks over the near-term.

The high-quality focus may also help dividend growers outperform or do less poorly than the broader markets during weaker periods.

Dividends have added significantly to returns over time, contributing approximately 32% of the S&P 500’s total return since 1960. During the return-challenged 1970s, dividends made up nearly three-quarters of S&P 500 returns – while investors earned a cumulative total return of 77% from the S&P 500 in that decade, 60% of that 77% was from dividends.

PFM holds nearly 300 stocks and its second-largest sector weight is technology at almost 16%. That’s meaningful for investors in the current environment and going forward.

Moreover, many tech companies already paying dividends have the balance sheets to support and grow those payouts.