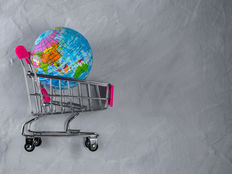 FMQQ Fantastic Idea for Next Areas of Growth

In the U.S., many investors know about the importance of the consumer. It’s said that consumer spending drives two-thirds of the GDP in the world’s largest economy.

As such, consumer discretionary stocks account for nearly 13% of the S&P 500. That’s more than the energy, materials, real estate, and utilities sectors combined. On a related note, the evolution of exchange traded funds is helping investors get in tune with opportunities related to emerging markets consumers. The Emerging Markets Internet Ecommerce ETF (EMQQ C+) is a prime example of an ETF in this category and one that’s got a knack for beating traditional emerging markets benchmarks.

Then there are frontier markets — another asset class made more accessible by ETFs. Those markets have their own interesting consumer stories. Thanks to EMQQ’s newly minted stablemate, the Next Frontier Internet & Ecommerce ETF (FMQQ B), investors can get in on the growth potential of frontier markets consumers.

FMQQ follows the FMQQ The Next Frontier Internet & Ecommerce Index. Requirements for entry into that index include member firms generating a majority of their sales from internet and e-commerce businesses. Those can include online retail, internet advertising, online travel and reservations services, gaming, digital media, and social media.

FMQQ features exposure to 16 countries, and its mix of emerging and frontier markets is potentially compelling for investors looking for a lower-risk approach to developing economies. Frontier markets can be seen as rough and tumble and less liquid than their emerging peers. FMQQ offsets some of that risk with large weights to countries that investors are already familiar with, including South Korea, Brazil, India, and Singapore.

In the cases of South Korea and Singapore, those markets are home to an array of high-quality, cash-rich companies and vibrant consumer sectors. Regarding India, that’s Asia’s third-largest economy, its consumer internet scene is growing in noticeable fashion, and it’s not just consumer spending. A bumper crop of initial public offerings (IPOs) is coming in India, many of which are consumer internet companies.