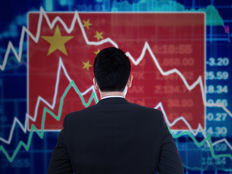 Despite the political issues around owning Chinese stocks, and although China’s economy has slowed, O’Shares Investments Chairman Kevin O’Leary called it “crazy” to have no allocation to Chinese stocks, and “makes no sense whatsoever,” especially at a time when China-listed stocks are so cheap.

“If you’re looking for long-term secular growth, there’s no question the Chinese economy over the next 20 to 25 years is going to become the largest economy on earth,” O’Leary told CNBC. “There’s no stopping that and no denying it.”

The entrepreneur explained that the “Chinese consumer is emerging” and demanding online services the way American consumers have been for years.

“I own China stocks. I have an index of them, particularly global internet behemoths, large companies like Alibaba,” O’Leary said, before adding, “if you own Amazon, why don’t you own Baba? The same idea. The Chinese are using online services the same way; Tencent, others, they’re there because that consumer is demanding it.”

O’Leary acknowledged that there are “a lot of political issues around owning Chinese stocks," but that "all of that is noise.”

China is the largest country exposure for the Emerging Markets Internet & Ecommerce ETF (EMQQ C+), making up a little more than half the fund’s weight as of Wednesday. By focusing on the internet and e-commerce in emerging markets, EMQQ looks to capture the growth and innovation happening in some of the largest and fastest-growing populations in the world.

The EMQQ Index climbed 3.7% in August, with the top five contributors all coming from China, including Pinduoduo, KE Holdings, Meituan, Tencent, and Alibaba.