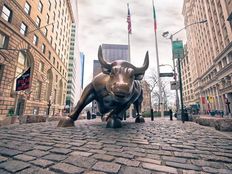 Emerging markets stocks have long tried investors’ patience, but some green shoots are appearing for the asset class, including constructive comments from a noted market strategist.

In a Monday note to clients, JPMorgan strategist Marko Kolanovic advised increasing an overweight position on emerging markets equities relative to developed market counterparts. If that thesis plays out, it could benefit scores of exchange traded funds, including the Emerging Markets Internet & Ecommerce ETF (EMQQ C+) and the Next Frontier Internet & Ecommerce ETF (FMQQ B).

“While the US appears to be on an aggressive tightening path, China is expected to ease as soon as this month. As such, we increase our OW of EM vs. DM stocks. We also maintain our large strategic OWs of Commodities and Energy stocks given structural supply/demand drivers,” Kolanovic said in the report.

EMQQ has recently shown some signs of life, jumping more than 6% over the past month. Kolanovic’s comments on China potentially deploying easy monetary policy are relevant to investors considering EMQQ because that fund allocates close to half its weight to Chinese stocks. For its part, FMQQ features no direct exposure to China.

Among specific developing economies, the JPMorgan strategist is bullish on Brazil, which is Latin America’s largest economy, noting that “valuations are undemanding even as earnings are revised higher.”

At the end of last year, Brazil was the seventh-largest country weight in EMQQ at a weight of 4.58%. The country is more prominently on display in FMQQ, which allocates 13.3% of its weight to that country, making it that ETF’s second-largest geographic exposure behind South Korea.

Brazilian stocks are poised to benefit as major index providers boot Russian equities from emerging markets benchmarks as some market observers believe that the result will be higher allocations to Brazil in those indexes.

Both EMQQ and FMQQ have exposure to Brazil’s burgeoning fintech scene.