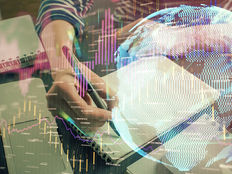 Sales for the e-commerce giant were up 9.7% year-on-year, with the sluggish performance largely originating from the core China commerce segment. Meanwhile, cloud and international commerce were relatively bright spots, with growth up 20% and 18% in those divisions, respectively.

“On one end, the cloud division and the company’s international e-commerce arm continue to report strong growth, but there was deceleration in the core China commerce business,” noted EMQQ founder & CIO Kevin T. Carter. “Management largely attributes the latter to a recent slump in consumption and increasing competition in its home market. But that’s not really the main concern for investors.”

Alibaba is the third-largest holding in the Emerging Markets Internet & Ecommerce ETF (EMQQ C+), with a weighting of 8.8%.

Carter added: “Chinese consumption will bounce back, especially with an uptick in stimulus this year, and many of the world’s largest internet platforms are used to dealing with competition. China’s e-commerce market is still far from a zero-sum game just given the sheer size of the population and growing middle class.”

While concerns shouldn’t be glazed over, “they’re largely reflected in the price.”

“With a forward P/E of 13x and net cash to market cap ratio close to 28%, it’s clear that Alibaba is now squarely in the value camp of the market,” Carter explained. “But what will it take for the company to shed the negative sentiment and start re-rating to a more appropriate valuation?”

According to the EMQQ CIO, it boils down to alignment. China played regulatory catchup in 2021, implementing a series of internet policies like GDPR in Europe, placing a greater emphasis on anti-monopolism and improved data privacy for consumers.

“We’ve seen our own tech giants struggle to adjust to those new European norms and it’s been no different for Alibaba in China,” Carter added.

Carter pointed out that Alibaba Group chairman and CEO Daniel Zheng emphasized that regulators still want the digital economy in China to grow and flourish.

“The tone between companies and regulators appears to be leaning more constructive and that’s something investors are keeping a close eye on,” Carter wrote. “The digital economy will remain a key strategic pillar for China’s growth over the next decade. It’s hard to imagine its largest consumer internet company not benefitting from that trend once the dust settles on the regulatory front.”