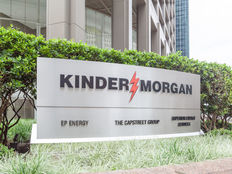 In 2022, KMI returned nearly $2.9 billion to shareholders in declared dividends and share repurchases. KMI repurchased 21.7 million shares at an average price of $16.94 per share during the year.

“On the share repurchases, we have used a little under $1 billion of the Board authorized amount, and the Board has now upsized the total authorization from $2 billion to $3 billion,” Steven Kean, CEO of KMI, said during the company’s fourth-quarter earnings call. “As always, those will be opportunistic repurchases when we use that capacity.”

With leverage well below its stated target, the company indicated it would be open to borrowing money for buybacks in response to a question. David Michels, CFO of KMI, said the company would be willing to increase its leverage a little bit for buybacks. “We’ll be real cautious around it, we’ll measure and make sure that we’re being — we’re using that capacity in an appropriate manner, but that is the way that we think about our available capacity,” he added.

Despite volatile weather and pricing experienced late in the fourth quarter, the company saw strengths in its natural gas segment during the quarter. During the call, Kean said the natural gas pipelines segment performed well above plan for the quarter, as did its CO2 segment, which benefited from continued high commodity prices.

Kean said KMI had originated new business during the quarter, growing its backlog to $3.3 billion, made up of high-probability projects at an EBITDA multiple of about 3.4×.

“These investments are weighted toward our lower carbon future in natural gas, renewable liquid feedstocks, and fuels in our products and terminals businesses and investments in our Energy Transition Ventures business,” Kean said. “And these lower carbon investments are all expected to yield very attractive returns well above our cost of capital. That’s how we told our investors we would approach these opportunities, and that’s exactly what we are doing. There are no loss leaders here.”

KMI is moving forward with projects to provide additional transport capacity for the growing U.S. LNG export market, as analysts project demand from LNG facilities will double in the coming years.

KMI has executed a detailed term sheet with the Red Cedar Gathering Company to provide transportation on KMI’s CO2 pipelines and permanently sequester captured CO2 at an existing Class II well in the Permian Basin, the firm said in a statement.

Red Cedar is moving forward with a project to capture CO2 from two natural gas treating facilities in Southern Colorado (up to 400,000 metric tons per year of CO2) and deliver the captured CO2 to KMI’s Cortez pipeline. Red Cedar is a joint venture between the Southern Ute Indian Tribe Growth Fund and KMI, with an ownership interest of 51% and 49%, respectively.

KMI announced on Wednesday its plan for management succession, with current CEO Kean transitioning out of his role after eight years, effective August 1. Kean will continue to be a director.

Kim Dang has been named as Kean’s replacement, transitioning from her current role as president into the CEO slot. Tom Martin, president of natural gas pipelines, will succeed Dang as president. Dang and Martin have each been with KMI for approximately 20 years.

Dang served as CFO before taking on the role of president five years ago. She has been on the Board of Directors since 2017.