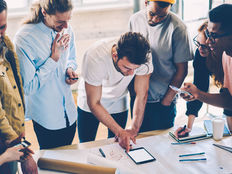 ERSX tracks 50 non-U.S. companies from around the world with market capitalizations between $300 million and $5 billion USD and have the highest rank based on the six investment style factors.

“EntrepreneurShares has created a rules-based methodology that selects publicly-traded Entrepreneurial companies,” according to the issuer. “This procedure is applied in creating the Entrepreneur Non-US Small Cap Index. The Index is comprised of 50 Non-US companies form around the world with market capitalization based between $300 million and $5 billion USD.”

These days, however, ERSX’s unique methodology is proving meaningful for investors. That’s important because smaller companies often sport higher leverage and are more rate-sensitive than their large-cap counterparts. Bolstering the case for ERSX are improving small-cap earnings revisions, confirming the group has some earnings momentum.

Due its methodology, ERSX has a growth feel to it and that’s alright because the growth factor is delivering for investors while some small-cap value funds struggle.

Investors can still enhance their portfolios as the bull market extends with growth-oriented stocks that continue to perform despite the recent bouts of volatility. The growth style has outperformed the market in spite of being prone to sell-offs with strong corporate earnings.

Data suggest investors may want to give ERSX over the near-term.

“But since tech stocks began to sell off in September, briefly sending the broader market lower, smaller stocks have begun to catch up,” reports Evie Liu for Barron’s. “Since Sept. 23, the Russell 2000 has risen nearly 13%, outperforming the S&P 500 by 4 percentage points. The small-cap benchmark is now approaching its year to date high of 1705.2, set in January, and is only 100-odd points below the record it reached in 2018.”