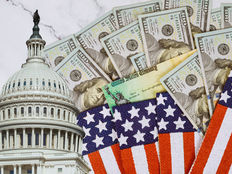 U.S. markets and stock exchange traded funds slipped Wednesday, giving up early morning gains, on disappointment that the delayed coronavirus stimulus won’t likely be passed until after the election.

Treasury Secretary Steven Mnuchin warned that a deal would not likely be made before the vote, further fueling negative sentiment after a mixed bag of quarterly earnings reports from major Wall Street banks, Reuters reports.

“At this point getting something done before the election and executing on that would be difficult, just given where we are and the level of detail, but we’re going to try to continue to work through these issues,” Mnuchin said at a conference.

The U.S. market are giving up recent gains fueled by optimism that the government would push through some form of economic stimulus, even a watered down version.

“Optimism took hold like a rocket last week and now it’s coming back down to earth a little bit,” Mike Zigmont, head of trading and research at Harvest Volatility Management, told Reuters. “I think a stimulus as a large macro event is already baked into stock prices. It’s just a question of when the details emerge and when the stimulus goes into effect.”

Equities also weakened on disappointing quarterly results out of the financial sector with major Wall Street banks reporting this week. Nevertheless, overall third-quarter earnings season is expected to show improvements over the prior quarter. Analysts expect earnings to fall 19% year-over-year, according to Refinitiv IBES data, compared to a 25% drop forecasted back in July 1.

The markets are also warming up to a Democratic victory. While many are wary that Democratic candidate Joe Biden is more likely to raise taxes, observers are betting on the potential benefits of a Biden presidency, such as improved infrastructure spending and less global trade uncertainty.