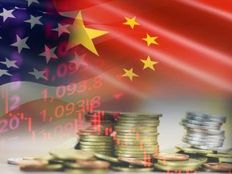 An Interesting Way to Nibble at Chinese Stocks

It’s long been said that emerging market equities are inexpensive relative to U.S. counterparts. That remains the case today, and China is a major reason why.

In traditional emerging markets equity benchmarks, it’s common to see weights of 30% or more to Chinese stocks. So it stands to reason that if the broader universe of developing market stocks are inexpensive, the same is probably true of Chinese equivalents.

On the other hand, given the slew of controversies affecting Chinese financial markets over the past two year, it’s also reasonable that some investors may not want to directly own individual Chinese stocks or the related exchange traded funds. The SPDR Bloomberg SASB Emerging Markets ESG Select ETF (REMG ) is an idea to consider for investors looking to capitalize on China’s cheap valuations while not going “all in” on the world’s second-largest economy.

“Chinese stocks have already fallen 25% in 2022, on the heels of a 20% decline in 2021. And with losses extending from H-shares to Red Chips, it’s difficult to imagine anything positive in 2023. But historically, Chinese stocks have posted solid gains after two calendar years of declines,” noted Matthew Bartolini, head of SPDR Americas Research. “Over the past 30 years, Chinese stocks have returned an average of 32% following five periods of two consecutive years of losses (2021 and 2022 will likely be the sixth such period). Dating back to 1993, there was only one period (2001 to 2003) when Chinese equities had a third year of losses.”

REMG follows the Bloomberg SASB® Emerging Markets Large & Mid Cap ESG Ex-Controversies Select Index and holds 740 stocks. At the geographic level, a third of the portfolio is directed to China. That’s more than double the second-largest country weight — 14.55% to India.

Understandably, investors are leery about Chinese stocks, due in part to the fact that earnings expectations have been in decline this year. However, if some historical trends repeat, China’s earnings funk could be short-lived, and the subsequent recovery could power a rebound in the country’s equity markets.

“China’s steady 2023 growth forecast coincides with the China Credit Impulse Index, a measure of new financing in the region, having risen every month for the past seven months — and finally turning positive for the first time since March 2021 in the past two months,” concluded Bartolini. “Historically, the index rises as the economy begins to recover. Positive readings have historically coincided with above market returns for Chinese equities over three subsequent time horizons.”

That could bode well for REMG.