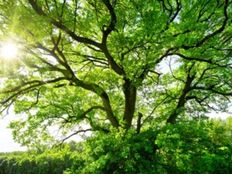 As ETFs surpass $6.5 trillion in assets under management, ETF providers are playing an increasingly pivotal role in investors’ portfolios—particularly in their ESG allocations. But how much do ETF providers walk the walk?

This year’s survey shows positive trends among ETF issuers in regards to voting practices; diversity, equity, and inclusion (DEI); and the structure of stewardship teams.

About the 2021 Sage Stewardship Survey

The survey included responses from 17 ETF providers, together totaling a collective $24 trillion in assets under management, of which their ETF assets represented $3.7 trillion. That represents roughly 56% of the total U.S. ETF market, and 86% of the U.S. ESG ETF market.

Every sponsor had ESG-mandated strategies within their firm, though the percentage assets that this mandate represented varied from 0.05% to 100% of AUM. The average was roughly 28% of AUM.

The survey assessed six core areas of stewardship, including voting, engagement, stewardship professionals, disclosure, climate initiatives, and DEI. The DEI questions were new to this year.

Of the ETF providers that responded to Sage’s survey, 76% received an overall passing grade of C or higher, representing a 19% increase over last year. Of the repeat responders, 75% improved their scores.

The biggest gain was seen in disclosures, with 71% of respondents receiving a passing grade this year, compared to 36% last year.

Another bright point was in DEI scoring. 88% respondents had a perfect A score, and more than 94% of ETF providers had independently stated DEI policies.

The size of a firm and its ownership structure seemed to make a difference in its overall stewardship grade, Sage found.

Voting practices and records are an excellent indicator of how deeply a company cares about its ESG initiatives, Sage has found.

“We view voting and engagement as complementary and necessary to completing the active ownership piece of the stewardship puzzle. Voting allows ETF Providers to make their stance on an issue known and also effect change,” said the report’s authors. “Engagement is an equally important active ownership tool. It allows ETF Providers to partner with portfolio companies and work toward longer-term goals.”

In addition to a set of questions on voting and engagement, respondents were asked to disclose their voting records for 2020, including engagement examples with portfolio companies.

This year’s results saw an uptick in providers voting, specifically in favor of ESG proposals. 71% of respondents received a passing grade in 2021, compared to 64% the previous year.

“In this year’s survey, we saw increased transparency from ETF Providers around both voting decisions and engagements, which we believe has been largely fueled by investor demand,” Sage noted.

76% of ETF providers indicated they have developed a formal engagement strategy with companies, and “29% of respondents indicated that their engagements are industry dependent, meaning they will choose to deep dive with companies of an industry in which they find it important to drive change,” the survey reported, such as oil companies.

“This year we took the questions a step further and asked the Sponsors to provide us with examples of measurable changes that have occurred because of direct engagement with a portfolio company,” Sage noted. “We were pleased to find that 76% of respondents provided examples. These examples help investors understand the discussions between ETF Sponsors and portfolio companies, and if there are measurable and demonstrable outcomes from those engagements.”

Increasingly climate change has taken on a sense of urgency in investors’ minds. Last year, Sage added a section to the questionnaire on climate change policies and oversight.

Sage saw a slight improvement in grades between last year and this one, with 53% of participants passing with a grade of C or higher. Of the repeat respondents, 25% improved, 75% saw no change, and none worsened their grades.

Encouragingly, 76% of respondents indicated that they had guiding climate principles, and 71% said they monitor climate-related risks in portfolios. “Physical climate risk and regulatory risk related to climate can have a tangible effect on the bottom line,” said Sage.

How The Structure Of Stewardship Teams Matters

Sage discovered an interesting divergence in the structure of the internal stewardship teams at various ETF issuers.

According to their results, ETF sponsors tended to set up their teams in one of two ways: centralized or decentralized.

In the centralized system, steward1ship professionals were central to all stewardship processes, not only advising the portfolio managers on ESG issues but also handling most or all proxy voting activities, engagement activities, and setting the strategy for all ESG issues.

Meanwhile, in the decentralized system, stewardship professionals operated in an advisory capacity about stewardship and ESG issues, leaving ultimate decisions about proxy voting and engagement up to the portfolio managers.

There are pros and cons to both systems, said Sage.

“It could be said that a centralized system allows for more cohesion in proxy voting, engagement decisions, and in the creation of a core vision on ESG factors for an entire firm,” said Sage, adding that “In the decentralized system those that are most involved with the daily activities of portfolio companies might be best informed on the proxy voting and engagement decisions.

“Although there was no positive or negative grade correlation to either system, it is something we will be monitoring and striving to understand in greater detail,” said the report’s authors.