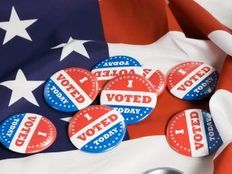 The 2022 midterm elections are less than three weeks away, making this the ideal time for investors to consider positioning for a variety of electoral outcomes. In situations like this, exchange traded funds are potentially more useful and less risky than individual stocks, particularly because various sectors and industries will react differently to election results. That is likely one reason why the SPDR NYSE Technology ETF (XNTK A-) is among the ETFs drawing attention ahead of Election Day.

While the electoral outcomes are yet to be determined, there’s no shortage of opinions on what advisors and investors should do if the current balance of power on Capitol Hill remains in place or if the majority party changes in either or both houses of Congress.

XNTK, which follows the NYSE Technology Index, is joining other technology ETFs to the downside this year — the result of rising interest rates that are making growth stocks less appealing. However, some market observers argue that the ETF could be prime for a post-midterm election rally.

“A Republican-controlled Congress likely will reject any significant corporate or individual tax increases put forth by Congressional Democrats. If that happens, it would mean no tax increase on multi-national income or OECD global tax,” noted Matthew Bartolini, head of SPDR Americas Research.

XNTK holds 35 stocks, featuring a mix of technology and consumer internet names. Additionally, the fund’s consumer discretionary exposure is expansive, indicating that if markets perceive the election results as conducive to fighting inflation, the ETF could benefit.

XNTK could also benefit from a change in the majority party in Congress because it would mean tax breaks signed into law under a previous administration stand a better chance of surviving through the next presidential election.

“Under Republicans, it would also be more likely that popular tax breaks get extended, or some provisions in the Inflation Reduction Act get reversed. As a result, sectors with large amounts of foreign income —,Technology/Semiconductors,— could be favored over domestic low-tax sectors like Real Estate),” added Bartolini.

The bulk of XNTK’s tech holdings are mature companies such as International Business Machines (NYSE:IBM), Apple (NASDAQ:AAPL), and Amazon (NASDAQ:AMZN), which could signal that the ETF is offering some near-term value.