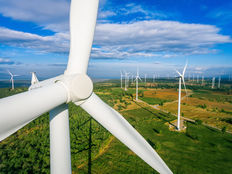 The already hot ALPS Clean Energy ETF (ACES) jumped nearly 3% last week as the Democratic National Convention (DNC) took place. That move by the high-flying ETF may not be a coincidence.

Rather, it could underscore markets expectations of how a Biden White House could benefit renewable energy stocks.

“Investors betting that Joe Biden will win the presidential election are buying up clean-energy stocks, sending the share prices of some companies to all-time highs,” reports Anna Hirenstein for Barron’s.

On the Other Hand...

However, there are some risks to the “banking on Biden” when it comes to ACES and other renewable energy ETFs. First, many of the legacy funds in the category disappointed during the Obama Administration. Second, these funds are soaring while President Trump occupies the White House, though recent strength in the group is not attributable to any specific Trump policy.

Still, some market observers aren’t shying away from the notion that a Biden White House favors renewable energy equities.

According to Barron’s: “A Biden victory would add huge impetus to the transition” to a lower-carbon economy, said Simon Webber, a Schroders portfolio manager for global equities. “The growth outlook for electric vehicles, renewables, hydrogen power, battery storage and many more industries would be turbocharged.”

It’s not clear if they’re making politically charged bets, but it is clear investors are wagering on ACES as the ETF has taken in almost $143 million in new assets this year on its way to a gain of 52.55%.