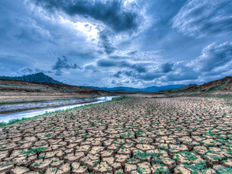 Climate Change May Be Ominous, but the ACES ETF Can Help

When it comes to the long-ranging rationale for energy ETFs like the ALPS Clean Energy ETF (ACES), climate change is by far the biggest issue.

ACES components, be they providers of wind and solar power or smart grid technologies, are at the forefront of mitigating climate-related threats. While current climate change forecasts may be troubling, they could ultimately be a plus for investors evaluating funds like ACES.

In the newest update of the Annual-to-Decadal Climate Update, the World Meteorological Organization (WMO) states that there is a 40% probability that one of the next five years will be 1.5 degrees over pre-industrial levels.

“There is a 90% likelihood of at least one year between 2021-2025 becoming the warmest on record, which would dislodge 2016 from the top ranking,” according to the study.

Many countries, including major economies such as the U.S., have what are known as nationally determined contributions (NDCs) – essentially goals to reduce carbon emissions. However, many countries are falling short of those goals.

Effective avenues for ameliorating that situation include reducing dependence on dirty coal as the primary source of power for electric utilities while expanding supplies of green energy sources.

ACES holdings are working toward those objectives now.

Issues such as food security, healthcare, and environmentally friendly development are important parts of the sustainable investing conversation.

Considering such a strategy over the near-term may be even more prudent when considering the fact that 2020 was one of the warmest years on record.