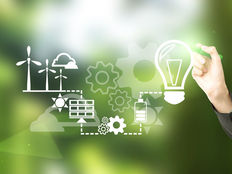 Energy Investing Is Terrific, If You Know Where to Look

Traditional energy equities and ETFs rebounded in the second quarter, but their year-to-date performances remain unimpressive. Their alternative counterparts, including the ALPS Clean Energy ETF (ACES), are, however, shining bright.

From a fundamental standpoint, there are compelling reasons to consider a fund like ACES over fossil fuel counterparts.

“The energy sector is the worst-performing stock market sector in the first half, with plunging oil prices and consumer demand alongside heavy debt loads among the driving factors,” according to Seeking Alpha.

Similar to what happened during the 2008 financial crisis, investors turned to renewable wind and solar farms as a safe-harbor investment with attractive yields. Wind and solar farms have long-term contracts to sell their electrical output to utilities and companies with good credit ratings for long periods, which makes their returns stable and relatively low risk.

Boosting the long-term cases for ACES are data confirming solar and wind installation prices will continue declining in the coming decade. Renewables prices could increase due to the coronavirus, according to some market observers, but the consensus appears to be that the spike will be short-lived if it arrives at all.

ACES is coming off a second-quarter gain of about 46%, a performance that easily trounced the upside delivered by traditional energy ETFs in the April through June period.