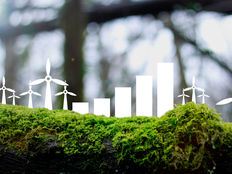 Despite some disappointment this year, much of it the result of political variety, exchange traded funds like the ALPS Clean Energy ETF (ACES) continue gathering assets.

For its part, ACES has seen year-to-date inflows of $300 million, representing a healthy percentage of the fund’s $1 billion in assets under management, according to Morningstar data. That puts ACES in the upper quartet of renewable energy ETFs, which is an accomplishment unto itself because ACES is the youngest member of that group at just three and a half years old.

ACES, which tracks the CIBC Atlas Clean Energy Index, targets renewable energy and clean technology companies and excludes firms deriving less than 40% of sales from clean energy pursuits. That’s one example of why investors need to evaluate what’s under the hood before jumping into the funds in this category.

“There are many different definitions of clean energy. The definitions employed by clean energy indexes can vary widely. Some only include clean energy providers. Some get granular and focus on a single source of renewable energy, such as solar or wind. Others are more expansive and include ancillary businesses that indirectly profit from the clean energy transition,” says Morningstar analyst Lan Anh Tran.

ACES is cap-weighted, but as noted above, its underlying index is rules-based. That’s meaningful because by mandating that member firms derive the majority of revenue from renewable energy, it weeds out impostors and companies that have extensive fossil fuels exposure.

“One of the more interesting findings from our April analysis of climate-aware funds was that many clean energy funds have significant fossil-fuels exposure,” adds Tran.

ACES allocates about 45% of its weight to solar and wind equities, and while some of the fund’s components have fossil fuels exposure, those companies aren’t 100% dependent on fossil fuels to drive growth, and they are still significant players in carbon reduction efforts. On that note, ACES and its rivals do an admirable job of presenting investors with options that are not highly correlated to traditional energy assets.

“Unsurprisingly, these funds’ performance does not track closely with a broad energy benchmark. Their correlation to the Morningstar Global Energy and Morningstar U.S. Energy indexes ranged between 0.50 and 0.60 over the trailing three years ending October 2021,” concludes Tran.