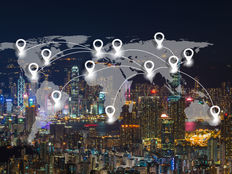 Global Travel Stocks Are Strong in First Weeks of 2023

The ALPS Global Travel Beneficiaries ETF (JRNY B-) has had a strong start to 2023 as global travel stocks rally, outpacing broader markets.

Global travel continues to have its pulse on the state of the consumer with strong travel spending expected to persist into 2023, per the U.S. Transportation Security Administration.

Global travel stocks have been rallying on China’s recent decision to move away from its zero-COVID policy, lifting quarantining requirements for incoming travelers for the first time since the beginning of the pandemic, resulting in a surge in airline bookings in China.

Airline stocks performed particularly well last week, increasing more than 12%, as investors were unfazed by the FAA system outage that grounded all U.S. flights. During the same week, the Association of Asia Pacific Airlines reported that the airline transported over 13 million international passengers in November, an increase of over sixfold from the year prior.

vettafi.com owned by VettaFi, which also owns the index provider for JRNY. VettaFi is not the sponsor of JRNY, but VettaFi’s affiliate receives an index licensing fee from the ETF sponsor.