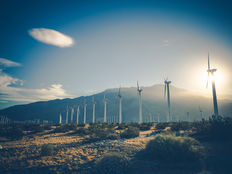 Renewable energy ETFs, including the ALPS Clean Energy ETF (ACES), are hot this year, but that bullishness isn’t a fad. It’s part of a broader, longer-term trend backed by favorable fundamentals and positive implications.

Bolstering the near-term case for ACES is that renewables continue pilfering share from dirty coal, in part explaining why the fund is higher by 27.11% in the current quarter.

“Although U.S. net generation in April fell 6.6% below the same month in 2019, renewable generation has continued to grow as a source of the nation’s supply and surpassed nuclear and coal for the second month in a row,” reports S&P Global Market Intelligence. “Renewables accounted for 23.3% of the total, expanding its lead on nuclear generation as the second-largest source of power supply. A nuclear generation made up 21.5% of the nation’s electricity, while gas-fired generation remained the largest supplier of power with a 39.3% share.”

“Year-to-date through April, utility-scale generation declined 4.1% year on year to 1.24 billion MWh,” according to S&P Global Market Intelligence. “Renewable generation grew 4.9% on the year to 257.8 million MWh, as the decrease in other renewable sources was offset by solar and wind.”

The growth of wind and solar is relevant to ACES because the fund allocates about 45% of its total weight to companies in those industries.

Producers of wind power are working to bolster efficiency with the aim of creating economies of scale that reduce costs and boost output. Should those objectives be realized, wind could add to its already-dominant renewables perch while continuing to steal market share from traditional fossil fuels.