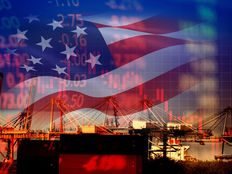 A plethora of industries are green today, as optimism over reopening the country seems to have returned, driving stock indexes and stock index ETF to rebound from a selloff on Wednesday.

Stock index ETFs are also rallying on optimism, with the SPDR S&P 500 ETF Trust (SPY A), the SPDR Dow Jones Industrial Average ETF (DIA A-), and the Invesco QQQ Trust (QQQ A-) all green in early afternoon trading, up more than 1.6% apiece.

The Nasdaq’s rally was spearheaded in mainly by significant moves in major tech names like Facebook, Amazon, Apple, Netflix, and Alphabet. Those stocks are all up at least 15% this quarter and are positive for 2020. Microsoft, another behemoth in technology, has climbed more than 16% this year and for the quarter.

“While we have all become even more dependent on the products and services provided by the FAANGMs during the Great Virus Crisis, they might have become more immune to government regulation,” wrote Ed Yardeni, president and chief investment strategist at Yardeni Research. “They have great balance sheets and generate lots of cash flow.”

Energy stocks have been making significant gains Thursday also, as oil prices popped almost 10% amid West Texas Intermediate crude oil approaching $27 a barrel, to reach a more than 30% gain on the week. If that weekly gain holds, it will be the biggest-ever for West Texas Intermediate futures. The resulting move caused Energy Select Sector SPDR Fund (XLE) to rocket nearly 4%.

Thursday market gains come after a selloff on Wednesday due to disappointing ADP numbers and concerns over reopening the country. 3.17 million Americans filed for unemployment benefits last week, bringing the seven-week total to 33.5 million. Still, analysts see some potential light at the end, or in this case middle of the tunnel.

“As awful these figures are, it is the least amount of claims since mid-March as we’ve likely cycled through the worst of the forced shutdown. We can now start analyzing the pace of reopenings, the level of business, and what that new reality will look like,” said Peter Boockvar, chief investment officer at Bleakley Advisory Group.