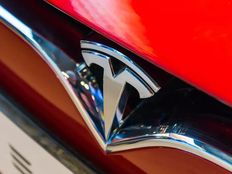 Tesla Inc. shares surged in premarket trading after the electric vehicle company posted its highest quarterly profit to date; the stock rose 7.1% before the opening bell on Thursday. As of midday Thursday, Tesla stock is up over 6%.

Late Wednesday, Tesla reported a record profit of $3.3 billion for the first three months of the year and signaled that vehicle production would keep growing despite shutdowns in China. Chief executive Elon Musk said the company would likely produce more than 1.5 million vehicles in 2022, up 60% over last year, the Wall Street Journal reports.

The best-performing segment of ACES in March was EVs, with five names gaining over 20%. The space has been uniquely positioned to benefit from favorable legislation.

The Biden administration invoked The Defense Production Act with $750 million to boost U.S. production of materials needed for EVs and EV infrastructure. The U.K. government also announced an expansion of EV charging points from 30,000 to 300,000 by 2030 in a clean energy plan worth over 1.5 billion euros, according to ALPS.