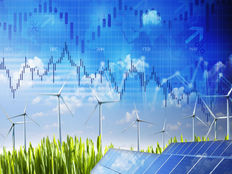 Seismic shifts pertaining to energy consumption with data confirming a renewables boom is underway. That theme is one of the bedrocks for ETFs, such as the ALPS Clean Energy ETF (ACES).

Data confirm that domestic utilities are generating less power via coal and more with alternative energy sources, such as wind and solar, potentially representing a long-term boon for ACES and its components. Other data points indicate coal is dying a slow death.

Indeed, ACES is in the right place at the right time.

“The U.S. consumed more energy from renewable sources last year than from coal, the first time that’s happened since the late 1800s when wood stopped powering steamships and trains,” reports Bloomberg. “Coal accounted for 11.3 quadrillion British thermal units of energy in 2019, a 15% decline from the prior year, a drop driven mainly by utilities turning away from the dirtiest fossil fuel.”

Currently, coal and renewables account for roughly the same percentage of power consumption in the U.S., but the latter is poised to overtake the former, particularly as renewable costs decline. In fact, it’s likely that by 2030, new solar and wind farms will cost less than coal-fired plants. Photovoltaic costs plunged 82% over the prior decade, indicating it’s reasonable to expect solar will eventually be more cost-efficient than coal.