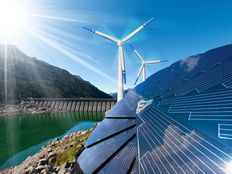 Solar Pillars May Prop up This Renewable Energy ETF

The ALPS Clean Energy ETF (ACES) is one of this year’s best-performing industry ETFs and a slew of favorable data points from the solar energy space are helping the ACES cause. Fortunately, there are positive long-term implications that can potentially contribute to more ACES bullishness.

“Solar tracker shipments reached new record levels in 2019 with shipments exceeding 31GW globally, an increase of 55 percent year-on-year,” according to IHS Markit. “Exceptional demand in the United States, as well as multiple 1 GW plus markets in Brazil, Mexico, Chile, Spain, and Australia, helped propel shipments to new heights. Furthermore, for many suppliers active in the United States the stepdown in the investment tax credit (ITC) and the willingness of developers to safe harbor for projects yet to be built has meant that 2020 started very strongly for numerous suppliers.”

Not only is clean energy consumption increasing, but costs are also decreasing, which in turn bolsters adoption. Additionally, coal production is slumping, adding to the virtuous cycle for alternative energy ETFs. Declining solar costs are expected to lure more corporate and residential customers.

“Overall, solar tracker prices are expected to continue to decline on a dollar cost per watt basis as the energy production per module continues to increase. The major benefit to developers and EPC’s will be the improved energy yield of using higher powered bifacial modules along with solar trackers which is expected to greatly improve the levelized cost of electricity for utility-scale projects and make solar more cost-competitive with other forms of energy generation,” notes IHS Markit.

While solar is shining, the sun can’t have all the fun—alternative sources of energy like wind and lithium funds could also experience more growth