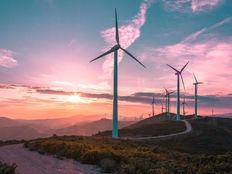 Renewable energy exchange traded funds, including the ALPS Clean Energy ETF (ACES), don’t lack for catalysts, but more could be on the way as some market observers see clean energy industries playing vital roles in the U.S. economic recovery.

“Wind and solar power have become even cheaper compared to fossil fuels in the past year, making them an attractive way to stimulate economies recovering from the Covid-19 pandemic, according to Lazard Ltd.,” reports Naureen Malik for Bloomberg.

Producers of wind power are working to bolster efficiency with the aim of creating economies of scale that reduce costs and boost output. Should those objectives be realized, wind could add to its already-dominant renewables perch while continuing to steal market share from traditional fossil fuels.

“While solar and wind have been cheaper than new fossil-fuel plants for years, the continued declines come at a pivotal time,” according to Bloomberg. “Countries are developing more aggressive plans to battle climate change while also looking for ways to revive economies battered by the pandemic.”

Much like infrastructure, renewable energy has the potential to be a vital jobs creator, particularly at a time when the U.S. is still struggling with the adverse economic consequences of the coronavirus pandemic.

“In its annual report, Lazard also looked for the first time at using hydrogen as a fuel to decarbonize the natural gas system and store excess electricity generated by renewables,” reports Bloomberg. “So-called blue hydrogen, which is produced from gas, eliminates 90% of the carbon dioxide emissions that come from burning the fuel directly by generators, and green hydrogen, that uses wind and solar electricity to get hydrogen from water, is carbon free.”