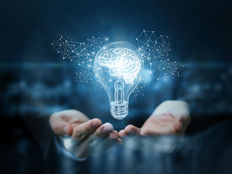 Third-quarter earnings season is in full swing, and some large- and mega-cap growth companies are stepping into earnings confessional, delivering big results in the process.

That includes familiar names that are often considered technology stocks, such as Alphabet (GOOG), Facebook (FB), and Microsoft (MSFT). Alphabet and Microsoft both delivered results after the close of U.S. markets on Tuesday, each doing what they normally do — knocking the cover off the ball.

However, those reports are also reminders that Alphabet and Microsoft aren’t in the same sector, underscoring the utility of broader approaches to growth stocks. Enter exchange traded funds, such as the Invesco QQQ Trust (QQQ B+) and the Invesco NASDAQ 100 ETF (QQQM B), which both track the Nasdaq-100 Index (NDX).

With Apple (AAPL) and Amazon (AMZN) also reporting earnings this week, QQQ and QQQM are all the more relevant for tech-enthused investors.

“The members of this quintet are often referred to as ‘technology’ stocks, which we think creates confusion for ETF investors,” said CFRA Research’s Todd Rosenbluth in a recent note.

Some of that confusion stems from Alphabet and Facebook previously residing in the technology sector prior to moving over to communication services. However, Amazon, despite its Amazon Web Services (AWS) unit being a dominant cloud computing firm, has never resided in the tech sector. It’s always been a consumer discretionary company.

“QQQ tracks the 100 largest non-financial companies trading on the Nasdaq and is also often referred to as a technology ETF. However, the ETF has just 49% of assets in companies classified as Information Technology stocks by GICS, with 19% and 18%, respectively, in Communication Services and Consumer Discretionary,” adds Rosenbluth.

Those sector exposures are the same in QQQM because it tracks the same index as QQQ. The material difference between the two ETFs is that QQQM is geared to long-term investors as highlighted by its 0.15% annual fee, or $15 on a $10,000 stake. The older QQQ, a favorite of professional traders and institutional investors, charges 0.2% per year.

“It is easy to think you know what is inside an ETF, given they often track well-known benchmarks and are labeled with common terms. However, CFRA believes investors need to look closely so they position their portfolios to fit their objectives,” concludes Rosenbluth.

As for QQQ and QQQM, both could offer investors plenty of excitement this week because, in order of weighting, Apple, Microsoft, Amazon, Alphabet, and Facebook combine for about 40% of the Nasdaq-100’s weight.