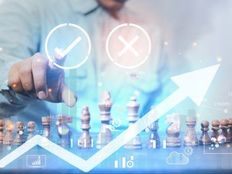 Some investors are apprehensive about embracing new exchange traded funds, but most related concerns aren’t borne out in real time.

Indeed, small-cap stocks and growth equities – the bulk of the QQQS portfolio – are struggling this year, but recent signs out of the small-cap space are encouraging. That could indicate QQQS is, at the very least, worthy of a look.

“After suffering bruising losses earlier this year, shares of many small, domestic-focused companies are outshining the large-capitalization stocks that dominate the U.S. equity markets. In October, the S&P 600 small-cap index has risen 5.3%, beating the large-cap S&P 500’s 2.6% increase. For the year, the S&P 600 is on pace to outperform the S&P 500 for the first time since 2016,” reports Hannah Miao for the Wall Street Journal.

One of the primary reasons market participants are renewing interest in small-cap stocks is that many of these firms derive significant portions of their revenue from inside the U.S. – a highly favorable trait at a time when the U.S. dollar ranks as the world’s best-performing major currency in 2022.

Translation: The more export-dependent a company’s top line is, the more vulnerable it is to a stronger greenback. However, that’s not a primary concern for many QQQS member firms.

“Smaller companies are more insulated from adverse foreign-exchange effects because they derive more of their business stateside. Companies in the S&P 600 generate just 20% of their revenue outside the U.S., compared with S&P 500 constituents that make 40% of sales abroad, according to FactSet,” reports the Journal.

Adding to the allure of QQQS is the point that its sector lineup is domestically focused. About 62% of the new ETF’s nearly 200 holdings hail from the healthcare and consumer cyclical sectors – groups that at the small-cap level usually generate the bulk of their sales within the U.S. Plus, small-caps are offering investors favorable valuations after declines experienced earlier this year.

“The valuations of small-caps look even more attractive when compared with large-cap stocks. The S&P 600 is trading at 10.8 times expected earnings over the next 12 months, according to FactSet as of Friday. That is below its 20-year average of 15.5 and well below the S&P 500’s forward price/earnings ratio of 15,” according to the Journal.