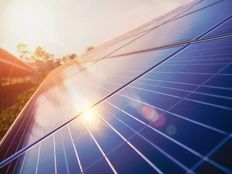 Perhaps it’s not surprising given the group’s history of often rallying in tandem with oil prices, but solar stocks are performing less poorly than the broader market in recent days.

While one day doesn’t make a trend, the Invesco Solar ETF (TAN C+) gained almost 3% on Monday on volume that was more than double the daily average. That extends the exchange traded fund’s one-month gain to almost 14%. The S&P 500 is down 6% over the same period.

With Russia’s invasion of Ukraine prompting massive rallies in natural gas and oil prices, in countries dependent on Russian gas, as much of Europe is, energy vulnerabilities are being exposed. Geopolitical tensions in Eastern Europe are reminding governments and investors that renewable energy is a valid part of energy independence.

“This has coincided with an increasing focus on switching to renewable energy sources, with growing concerns around the climate crisis. The conflict could, therefore, accelerate the adoption of renewable energy. Indeed, Germany said earlier this week that it is now bringing forward its goal of having all its electricity powered by renewables to by 2035, according to reports reports Vicky McKeever for CNBC.

TAN, which turns 14 years old next month, tracks the MAC Global Solar Energy Index and is home to 51 stocks, some of which are drawing bullish commentary from analysts amid soaring oil prices.

“Credit Suisse research analysts like U.S. residential solar company Sunnova Energy. The company’s shares were trading at $18.97 on Friday, but Credit Suisse analysts think that price could more than double, with a target price of $53 and an outperform rating,” according to CNBC.

Sunnova Energy International accounts for 2.51% of TAN’s weight. Some analysts are bullish on Enphase Energy Inc. (NASDAQ:ENPH), and that’s relevant to TAN investors because that’s the fund’s second-largest holding at an allocation of 9%. Enphase is a major player in the fast-growing residential solar market.

“SolarEdge, as a global leader in module power electronics, has made notable progress in growing its business and taking market share from competitors in multiple geographies and end markets, notably commercial,” said Cowen analysts in a recent note to clients.