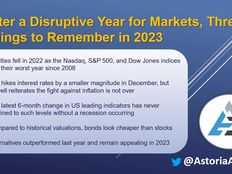 After a Disruptive Year for Markets, Three Things to Remember in 2023

Fed Hikes Less, But the Fight Isn’t Over

The Federal Reserve raised interest rates by 50 bps at the December FOMC meeting, leaving the federal funds rate at the 4.25–4.50% range, the highest level in 15 years. The smaller rate increase broke the prior streak of four consecutive 75 bps hikes and came after cooler CPI (Consumer Price Index) and PPI (Producer Price Index) prints for October and November. Although the reduced magnitude suggests the Fed feels inflation is moderating, Powell indicated that the battle against inflation is not over, given his statement, “It will take substantially more evidence to give confidence inflation is on a sustained downward path.” He also expressed that it is too early to discuss rate cuts, and that the Fed will not raise its 2% inflation target to prevent some pain in the labor market. “Our focus right now is really on moving our policy stance to one that is restrictive enough to ensure a return of inflation to our 2% goals over time, it’s not on rate cuts,” Powell said. The Fed’s median dot plot projection points to a 5.1% terminal rate in 2023, implying three additional 25 bps hikes for the year. Many economists see these occurring early in the year with rate cuts to follow in the second half.

The Conference Board Leading Economic Index (LEI) consists of 10 leading components whose changes tend to gauge the future short-term outlook for the US economy. Based on its latest 6-month change, the indicator has never declined to such levels without the US enduring a recession.

Will Bonds Outperform Stocks in 2023?

Given the negative returns produced by stocks and bonds in 2022, both asset classes have experienced a reset in valuations. However, compared to historical valuations, stocks have become less expensive but are still not cheap while bonds seem noticeably cheap. This, combined with a probable recession in 2023, make bonds seem attractive and favor the asset class to outperform.

Including Alternatives in Portfolios

A hypothetical 60% S&P 500 Index / 40% Bloomberg US Aggregate Bond Index portfolio returned approximately -17% in 2022, marking its second-worst year on record since 1976. However, various alternative investments were resilient in 2022 (see indices in Exhibit 4), and some strategies even produced positive returns. Hence, including a small allocation to alternatives would have benefited portfolios, and such investments remain appealing as they may continue to hedge downside risk in 2023.

After a Disruptive Year for Markets, Three Things to Remember in 2023

Over the past decade, investors had tailwinds from low rates, a Fed put, and deflation, causing buy and hold low-cost beta ETFs to produce high Sharpe Ratios. A vast amount of assets flowed into such strategies and valuations were distorted. The current environment is very different, and is characterized by high inflation, higher interest rates, and the absence of a Fed put.

There are three notable elements of portfolio construction we implement which differentiates us from our peers: 1) tilting away from large-cap/core beta, 2) mixing factors in our portfolios, and 3) using liquid alternatives to help hedge the downside. Because of the differences in today’s environment, alternative strategies are outperforming, and we feel this could continue if the bear market and recession fears persist. Selling liquid alternative strategies was difficult when both and stocks and bonds produced attractive returns as they have in the past 10 years, but the next decade likely won’t see the same winners as the prior cycle. Keep in mind that investing requires a forward-looking approach. Don’t invest by looking in the rear-view mirror.

Moreover, here are three things to remember in 2023: 1) The consensus usually doesn’t pan out. What is the consensus right now? There will be an economic recession, an earnings recession, and the Fed will cut rates in the second half of 2023. Perhaps one of these will manifest, but likely not all three. 2) What matters most is whether the S&P 500 falls another 20% in 2023. This would mean approximately back-to-back 20% drawdowns: a disastrous impact for long-term wealth accumulation. We advocate using alternatives and laddered bonds to hedge your portfolio risk. 3) It is a good time to invest. Yields are high, and valuations (ex-US large-cap index) are attractive. Ignore the noise you hear. If you have a multi-year time horizon, set it and forget it.