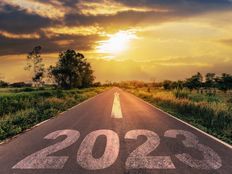 Happy new year!  We hope this year brings you and your family times of joy.

It is time of year when the talking heads start to make their market predictions.  Watching the news and business networks, you will begin to hear plenty of cherry-picked, sometimes oddly specific stats, such as “the second year of a President’s term is normally the worst performing year for the market, but the third year is the best performing year on average” or that “the market has been up 80% of the time following a down year since WWII and has experienced above average returns.”

Analysts will start to give their market price targets and cite arbitrary reasons for why the markets will go where they project.  You will also see several articles or news segments titled “best stocks to own in 2023.”  Very few of these predictions will make logical sense (why would the President’s second term be worse than the third?), and even fewer will have the relevant statistical data to support the prediction.

The bottom line is this: nobody really knows where the markets will be one year from now, or in six months, or even tomorrow.  Predictions in markets are more often wrong than not.  Making often wrong (but never in doubt) predictions does little value to investors.

While we do not want to use statistics to make predictions, we do have a few stats prepared to paint the reality of where the markets have been in the past year.

It feels like we have written about outlier days just about every week this year.  As one last reminder for 2022, Canterbury defines an outlier day as any trading day beyond +/-1.50%.  This is derived from taking two standard deviations of average daily returns on the S&P 500 during a Canterbury-defined Bullish Market State.  According to bell curve math, an outlier day should only occur about 13 times per year (252 trading days) during a rational, bull market.

The market, or S&P 500, had been anything but rational in 2022.  In 2022, there were 79 outlier days, or one outlier every 3 trading days.  That is about the number of outliers you might expect to see over a six-year period of a rational market environment.  Surprisingly, there were the same number of outliers that were “up” days as there were outliers that were “down” days (38 up, 39 down).  Since 1950, there have only been two calendar years to feature more outlier days than the markets had in 2022 (2002 & 2008).  Both years had substantial declines.

You are probably familiar with the term “diversification.”  Diversification is used to manage market risk, which is defined as volatility and large declines.   “Efficient” diversification means owning uncorrelated assets.  In traditional portfolio management, for the conservative investor, that is done by holding a balanced allocation of both stocks and bonds.  The assumption is that stocks and bonds will not be correlated with each other or move in the same direction at the same time.

For 2022, the traditional method of diversification failed the conservative investor.  Markets will fluctuate up and down.  It is not out of the ordinary or unprecedented for the S&P 500 to decline by -20%.  Most would hope that a decline in the equity markets would be offset by a rising bond market to help mitigate portfolio volatility.  Unfortunately, for traditional investors, just like stocks, bonds also experienced a bear market in 2022.

The Leaders Have Become the Laggards

At the end 2021, the largest seven capitalized stocks in the S&P 500 were Apple, Microsoft, Google, Amazon, Tesla, Facebook (Meta), and Nvidia.  Collectively, these stocks accounted for 27% of the S&P 500’s daily movements.  That means that over a quarter of the market’s return was attributed to just 7 (out of 500) company stocks.

Prior to 2022, each of these stocks had seen large, parabolic increases in share price.  An emotional buying panic that results in a price “bubble” will is eventually followed by a burst and sharp decline.  Now, many of these stocks have seen large drops and were big contributors to the S&P 500’s decline in 2022.  The table below shows each of these stocks, with their 2022 return as well as their largest peak-to-trough decline (difference from lowest value this year and highest value over the last 2 years).

This year, 2023, will begin the same way 2022 ended.  We are in a highly volatile market environment for both stocks and bonds.  The largest stocks that had led markets higher have now caused the markets to put in a series of lower highs and lower lows.

At Canterbury, we do not believe in making predictions about where the markets will end up one year from now.  Our Portfolio Thermostat process is designed to adapt to the existing market environment as it changes.

In other words, Adaptive Portfolio Management will deal with the realities of the markets right now.  The combination of securities that produced the most efficient portfolio during the stable 2021 market, looked very different from the most efficient combination of securities during the 2022 volatile market.  It is likely that the efficient portfolio in 2023 will change dramatically over time and look very different to end the year.  That is why the Canterbury Portfolio Thermostat is designed to be adaptive and move in concert with changing market environments, all while staying fully invested.

In the next few weeks, Canterbury will be producing a video discussing the markets and the Portfolio Thermostat.