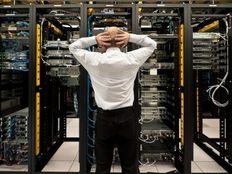 Let’s start with the bad news. The bad news is that the market is 91% overbought. Both the daily and weekly trends for the market continue to be bearish. In other words, regarding technology and other sectors, we are still in a series of lower highs and lower lows, until proven otherwise.  Volatility remains high, which is a primary bear market characteristic.

The slight good news is that the market has been flat since mid-June, while the larger technology stocks have put in new lows.  That is a positive considering technology’s large weighting in most major market indexes.  While the S&P 500 was once tilted 40%+ towards technology-related stocks, and technology-heavy indexes are registering new lows, value-oriented securities have picked up the slack.  Although the market has been relatively flat since June, it has taken a lot of volatility to get there.

It is no secret that large technology stocks have struggled mightily in 2022.  It was also no secret that there was a high percentage chance that tech stocks would eventually lead to market weakness.  For the last several years, the hot names like Facebook, Amazon, Tesla, Netflix, Google, and Nvidia (just to name a few) have carried the markets higher.  Coming out of March 2020, these securities saw a substantial, parabolic rise.  All parabolic curves end the same way.

Here is a lengthy quote from a previous market update, which was titled “The Nasdaq has a Weight Problem.”

The S&P 500 is heavily weighted towards technology-related stocks, and 50% of the Nasdaq 100 is made up of only 8 stocks.  Therefore, the S&P 500 has been led by just a few large tech-related names… This is not the first time this has happened.  The percent of Tech-related stocks was almost the same in 1999 as it is today.   As we discussed at the beginning of this update, tech stocks went up more than 1000 percent from 1993 to 1999.  Because the S&P 500 is a momentum index, the hottest performers will grow to be a larger component. Technology-related stocks went from representing 15% of the index in 1993 (when you add in communications stocks) to representing nearly 40% by 1999.  The sharp advance seen in tech stocks was ultimately followed by a sharp decline that dragged the rest of the market down with it.

We have all heard the saying of “history repeats itself.”  Will history repeat itself in the markets?… Whether its tulip bulbs, beanie babies, Pokémon cards, bitcoin, or stocks, markets have a way of sometimes getting too emotional and reacting in a volatile manner.  While technology stocks have been the best area of the markets for the last 10-12 years, will the next 10 years be the same?  When a bear market comes, and it will eventually, it will have to be led by technology stocks due to its large weight in the markets.
​
We don’t know when a bear market in technology will occur, only that it will happen at some point, or multiple points in our lifetimes.  All parabolic advances lead to the same result eventually—a sharp decline.

Ever since Facebook changed its name to ‘Meta,’ in October 2021, the stock has been anything but “meta” (Most-Effective-Tactic-Available).  Since its September 2021 peak, the stock is down -75%.  In 2021, Facebook was the 5th largest stock in the S&P 500.  One year later, it is now outside the top 25.   Stocks like Tesla and Amazon, while still remain large components in the market, are breaking key support levels.  Netflix is down -60% over the past year and Google should consider removing the search engine results for their own stock price, down -40%.

For better, or worse, these companies have changed our lives to the point of being unrecognizable from how people leisured 30 years ago.  But, to quote our previous update:

“Markets are driven by supply and demand.  Supply and demand are driven by human beliefs and how emotional they are about their future predictions.  Throughout the course of history, we have seen significant advances in technology and new business models that would have been unrecognizable in previous generations.  That being said, human behavior has remained relatively the same.”

All stocks will eventually experience a bear market, just as we are experiencing right now.

To quote the great Yogi Berra,_ “it’s like Déjà vu all over again.”_ As our good friend David Vomund wrote this week,_ “it looks like 2000-02 all over again.  The best investment advise right now is to own your parent’s stocks.”_

Value stocks are leading the markets.  While the S&P 500 is flat since mid-June, the Dow Jones Industrial Average is up slightly.  Energy stocks continue to outperform.  It is interesting that the markets will continue to confuse the masses.  Tech stocks have been the leaders for 10+ years.  During that time, Energy has been at, or near the bottom.  This year, the roles have been reversed.  Energy is at the top and Technology has been at or near the bottom.  If the trend continues, maybe Energy stocks could become the new ‘FAANG’, although we would need a new acronym.  One thing we know for sure is that this week market could use some new energy

It is not all doom and gloom out there, but success in this type of environment is not about picking the right stock that will go up.  It is about Portfolio Management and holding the right combination of securities that move differently from each other.  More importantly, it is about adapting that portfolio to move in concert with the everchanging market environments, whether they are bull or bear.