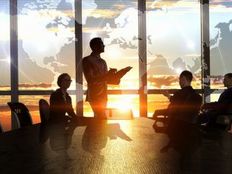 The title of this update mentions the international markets, but let’s actually begin with the US markets.  The S&P 500 has had a continued pattern of lower highs and lower lows.  Two weeks ago, the S&P 500 challenged its 200-day moving average of price, which can act as a key point of resistance.  It had previously failed to break above the moving average back in August.  Two weeks ago, it failed once again.

In the chart below, which shows the S&P 500, the blue line is the S&P 500’s 200-day moving average of price.  The downward sloping “trend” line marks price resistance and has been drawn from the market’s recent peaks.  Each time that trend line is touched and bounces off, it makes the resistance more significant.  You can see that the trend line and the 200-day moving average intersect one another.  The S&P 500 touched these lines, prior to moving lower over the last two weeks.

Up through mid-October, one of the strongest performing asset classes had been the US Dollar.  Typically, a rising US Dollar results in weaker relative performance for international equities.  For Americans, and funds denominated in US Dollars, the performance of international securities is a function of both the percentage returns of those securities and the return of that country’s currency relative to the US Dollar.  A strong US Dollar reduces the returns of a foreign security, whereas a weak Dollar increases the returns of a foreign security.

As a result of a weakening US Dollar, some international indexes have seen relative strength over the US markets recently.  One benefactor of the falling Dollar has been the Euro Stoxx 50, an index made up of the 50 largest, most liquid eurozone stocks.  We mentioned earlier in this update that the S&P 500 failed to sustain a break above its 200-day moving average.  From a technical perspective, the Euro Stoxx 50 (as shown in the chart below using ETF: FEZ), has broken its trend of lower highs and thrusted through its 200-day moving average.

While the S&P 500 has wavered over the last few weeks, a weakening US Dollar has led to some strength in a few international indexes.  Remember, markets are dynamic and everchanging.  While these international indexes have been favorable recently, markets can always pivot.  Right now, however, the Euro Stoxx 50 index is outperforming the US markets and is currently showing some more favorable characteristics.