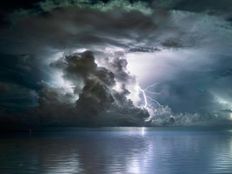 To start this week’s market commentary, we want to reference last week’s update:

Do not get overly emotional or concerned about the day-to-day fluctuations of the markets.  More importantly, do not get hung up in the day-to-day reasons for why the markets fluctuate in a particular direction.  Market noise is louder in a bear market, where investors will overreact to news events in either direction.

The market’s day-to-day fluctuations during a bear market are random.  No one knows whether a day will finish up, down, or sideways.  Take last Thursday as an example.  The S&P 500’s morning futures were up over +1.00% until news of worse-than-expected inflation broke.  As the market opened, the index sank to -2.25%, with the technology-heavy Nasdaq falling more than -3%.  To the surprise of many, within two hours of trading, the many markets were actually up, and the S&P 500 finished the day up +2.60%.  Friday saw the opposite occur, with the index falling -2.40%.  Why?  Markets are emotional, and noise is louder in a bear market.

The daily fluctuations of the markets have been random, and the daily volatility has come in both directions.  If we include today’s close (Monday, October 17th), of the 199 trading days in 2022, 66 of them have been “outliers.”  As a reminder, an “outlier day” is a single trading day ending greater than +/-1.50%.* Of those 66 outliers, 34 of them have been to the downside and 32 of them have been to the upside.  So, the bottom line on daily fluctuations is that you can expect to see an outlier day once every 3 days, and it is a coin flip whether the outlier will be up or down.  In fact, the longest amount of time the S&P 500 has gone this year without seeing an outlier day is only 11 days.

Volatility has come in waves over the last two weeks.  The S&P 500 rallied more than +5% in the first two days of October and followed it up with six consecutive down days that erased the index’s gains.  Then came Thursday’s large up move and Friday’s large down move.  All-in-all, the S&P 500 is flat over the last two weeks ending Friday and has total upward fluctuations of +8% and total downward fluctuations of -8%.  That is a lot of volatility to go absolutely nowhere.

This “sideways” volatility comes with the news and reactions of the jobs data, inflation, and the Fed.  One could take it as a slight positive that given all the bad news and Fed speculation, the market has gone sideways near its June low point.  It appears that the sideways move is the market attempting to make a low, but it also has yet to show that it wants to have any sort of sustained rally.  We will see how the markets react during what many are expecting to be a bad earnings season.  So, how will the market react if earnings are good and how will they react if they are bad?  Well, as the data shows, it could go in either direction but expect the markets to remain volatile.

As a positive, and to be taken with a grain of salt, there is an old technical research firm called “Lowry Research.”  Their data shows that the most common theme near the bottom of a bear market is a series of days where the volume of advancing stocks accounts for 90% of the total volume of the exchange.  According to our good friend and expert market technician, David Vomund, that has now occurred three times this month after Thursday’s move.  He goes onto say that “given the Lowry report, having three 90% volume up days near the June low is constructive.”

There is not much new to share when it comes to the markets.  They are volatile, whether we are talking about stocks or bonds.  It has become clear that this isn’t the “V” bottom -20% drop and a quick rally to a new high that we have seen twice now in the last five years (see December 2018 & Covid for examples).  This market has shown a pattern of lower highs and lower lows.

Over the last two weeks, the markets may have moved sideways, but they have been volatile.  You do not know where the market is going to open, nor where it will close.  What we do know is that the number of outlier days is not slowing down just yet.  Volatility is expanding, not contracting.  That is a bear market characteristic.

The Canterbury Portfolio Thermostat has taken steps to limit the number of outlier days seen in the portfolio and is currently positioned to benefit from any short-term rally that may occur.  Keep in mind that any potential short-term rally is not expected to be sustainable, and the portfolio will continue to make adjustments throughout this bear market.  Bear markets take time to shake out and it takes a comprehensive, adaptive process, like the Portfolio Thermostat, to benefit from the volatile swings of a bear market.

*Outlier Day Definition: Canterbury defines an Outlier Day as any singular trading day beyond +/-1.50%.  We arrive at this definition through empirical study on Market States and bell curve data.  During a Canterbury-defined Bullish Market State (defined using objective, technical indicators), the daily standard deviation of the S&P 500 has been 0.75% dating back to 1950.  Therefore, using bell curve math, a trading day of beyond +/-1.50% (two standard deviations) should occur in 5 out of 100 instances.  During a low volatility, bull Market State, you would expect to see about 13 outlier days in a single year.  During a bearish or transitional Market States, outlier days occur more frequently.