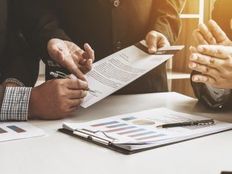 Buy Into the Corporate Debt Being Issued With VCSH

U.S. companies are taking advantage of easier financial conditions by issuing billions in debt. Citing data from Dealogic, the Financial Times is reporting that companies have issued $63.7 billion in U.S.-marketed debt in the first week of the new year — most of it investment-grade. This is well above the $36.6 billion in corporate debt U.S. companies issued in the last five weeks of 2022.

This is after the Federal Reserve has raised interest rates to a range of 4.25% and 4.5%. And while the cost of borrowing is significantly higher than it was a year ago, it has dropped since peaking in October.

Despite having declined in recent months, inflation is still well above the Fed’s target inflation rate of 2%. So, the U.S. central bank is expected to continue to raise rates (the FOMC has stated as much). Investors are betting, however, that interest rates will peak at roughly 5% in June, which would bring down yields on corporate debt.

VCSH seeks to track the performance of a market-weighted corporate bond index with a short-term dollar-weighted average maturity. The fund employs an indexing investment approach designed to follow the performance of the Bloomberg U.S. 1-5 Year Corporate Bond Index.

This index includes U.S. dollar-denominated, investment-grade, fixed-rate, taxable securities issued by industrial, utility, and financial companies, with maturities between one and five years. Under normal circumstances, at least 80% of the fund’s assets will be invested in bonds included in the index.