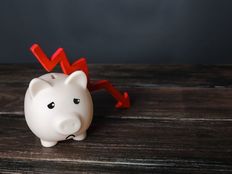 While the Federal Reserve just raised interest rates by 50 basis points following an upbeat inflation report, many still believe that a recession is nigh — if not already upon us. Economists polled by Reuters expect the U.S. economy to head into a “short and shallow recession” over the next year.

Some argue that a recession is already here, thanks to the Fed’s hawkish approach to curbing inflation with raising rates. Danielle DiMartino Booth, CEO and chief strategist of Quill Intelligence, is quoted in Fortune as saying: "The Fed’s efforts have already pushed the U.S. economy into recession.”

The consumer price index rose 0.1% in November after increasing 0.4% in October, while the index increased 7.1% over the last 12 months. These figures are lower than what economists surveyed by Dow Jones were expecting, which were monthly and annual increases of 0.3% and 7.3%, respectively.

But while inflation is cooling, it’s still well above the Fed’s target rate of around 2%. On Wednesday, the Fed announced that it would be raising interest rates by 0.50%, in line with Wall Street’s expectations. This is after the U.S. central bank implemented four consecutive rate hikes of 0.75%.

With many industry observers expecting a recession in 2023, it will be important for companies to have ample free cash flow. Free cash flow is the cash left over after a company has paid expenses, interest, taxes, and long-term investments. It is used to buy back stocks, pay dividends, or participate in mergers and acquisitions.

FCF Advisors specializes in free cash flow investment strategies, primarily through its Free Cash Flow Quality Model. They have been focused on this factor since 2011 and are specialized in multi-factor fundamental analysis grounded in decades of research. Two exchange traded funds that FCF Advisors offers are the FCF US Quality ETF (TTAC C+) and the FCF International Quality ETF (TTAI C).

TTAC aims to outperform the Russell 3000 through a fundamentals-driven investment process that selects about 150 stocks based on free cash flow strength. Its holdings are then weighted by a modified market-cap log transformation, allowing increased exposure to companies with the strongest proprietary rankings.

TTAI, meanwhile, aims to outperform the MSCI All Country World Index ex the U.S. through an active investment process. A quant model is used to rank stocks based on proprietary measures of free cash flow. Highly leveraged firms that incur debt to buy back shares, or don’t satisfy ESG criteria, are screened out. Roughly 150 of the highest-ranked stocks are selected and then weighted on a modified market-cap basis that factors in free cash flow and log transformation.

Both ETF portfolios will also be rated with an ESG score, excluding companies with low ESG ratings. Firms with an extreme rise in shares count and increase in leverage are excluded.