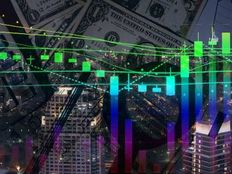 Utilities are the epitome of a defensive sector, but these days, that’s a favorable trait and with the right methodology, utilities stocks can offer surprising growth opportunities.

The right methodology could come by way of the Goldman Sachs Future Real Estate and Infrastructure Equity ETF (GREI B-). The actively managed GREI isn’t your grandfather’s real estate or infrastructure ETF. Rather, it looks to combine the attractive attributes of those sectors while still offering investors a credible growth profile.

Indeed, real estate and utilities stocks combine for 78.6% of GREI’s roster as of September 26, according to issuer data. The utilities allocation could be beneficial at a time when investors are looking to scale back risk. In fact, recent data from Bank of America indicate utilities is one of a small number of sectors investors allocated money to in recent weeks.

Additionally, some of GREI’s utilities may have more growth opportunities than meet the eye because the sector is an increasingly prominent player in the renewable energy discussion.

“The stability of utility companies may not be the only factor in their ability to attract investors as of late. The federal government, thanks to the Inflation Reduction Act, also known as IRA, along with state and local governments, have increased their efforts when it comes clean to energy investment. That will create new opportunities for utility companies to expand over the next decade, Morningstar senior equity analyst Travis Miller says,” noted Morningstar analyst Jakir Hossain.

Combine the passage of that legislation with investors’ desire for low volatility equity exposure and it’s not surprising that utilities stocks, including some GREI holdings, are performing less poorly this year than the broader market. Nor is it surprising that the sector isn’t exactly inexpensive.

“All of that has contributed to investor’s enthusiasm, which has driven up valuations and made utilities the most overvalued stock sector in the market, according to Morningstar analysts. As of September 15, it trades at an 8% premium relative to Morningstar’s Fair Value Estimates,” added Hossain.

That’s not unreasonable because history confirms that in volatile markets and recessions, investors flock to utilities stocks, often pumping valuations higher in the process. Utilities being expensive or not, GREI could be one of the more compelling sector strategies for the fourth quarter and into 2023.