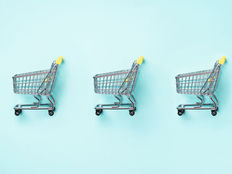 In recent years, much has been made of evolving consumer tastes, namely how and where consumers spend money.

An array of exchange trade funds purport to provide exposure to future consumer themes, but not all of those funds live up to that billing. One that does is the Goldman Sachs Future Consumer Equity ETF (GBUY C).

One of GBUY’s primary advantages is active management. While passive sector funds have served investors well, many aren’t adequately allocated to future stars. That’s particularly true when it comes to consumer cyclical stocks. Additionally, due to their backward-looking methodology, cap-weighted sector funds can be heavily concentrated in a small number of names.

That’s definitely true in consumer discretionary, where Amazon (NASDAQ:AMZN) and Tesla (NASDAQ:TSLA) combine for over of 40% of cap-weighted funds’ rosters. Conversely, GBUY’s largest holding, which is Amazon, accounts for 6.9% of the fund’s weight. Additionally, GBUY is more levered to the themes that make consumer discretionary a compelling long-term bet.

“With nearly five billion people under the age of 40 worldwide, Millennials, and increasingly, Generation Z, are the world’s most powerful consumer force,” according to Goldman Sachs Asset Management (GSAM). “Their collective income already eclipses that of all other generations and, as a result, they’re driving growth in spending and are set to dominate the consumer landscape for decades to come.”

GBUY is unique in this category in that it’s not a dedicated consumer cyclical ETF. That sector is the second-largest in the fund at a weight of 26.3%. However, GBUY’s approach to that sector is compelling because it’s global and taps into something many younger consumers love: aspirational luxury brands that are often lacking or excluded from traditional, rival ETFs.

Another critical element of the GBUY thesis is that younger consumers are comfortable with online shopping. Many even eschew standard brick-and-mortar retail infrastructure.

“What’s interesting to us as investors is that younger consumers typically have different consumption habits and preferences to older generations,” added GSAM. “As the first generation of digital natives, they’ve grown up with technology at their fingertips and leverage it in everything they do. We’ve also seen different things matter to them. They prioritize experiences and care more about health and wellness.”

GBUY has some exposure to those concepts. Moreover, a combined 47.6% weight to communication services and tech stocks confirms the ETF has broad reach into the future consumer ecosystem and doesn’t rely solely on cyclical retail stocks.