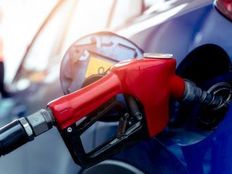 Gas companies like Exxon Mobil, Chevron, and ConocoPhillips rallied during morning trading on Thursday after it was revealed that gas prices are lower than they were a year ago. The national average for a gallon of unleaded gasoline in the U.S. was $3.329 on Thursday, according to AAA, below the $3.343 from a year ago. This is after unleaded gas reached a record $5.02 per gallon in June.

GasBuddy’s head of petroleum analysis Patrick De Haan told CNBC that the national average will likely drop below $3 per gallon by Christmas. ″$2.99 looks like a pretty strong shoe-in at this point,” DeHaan said. “The question is if it’s going to be at 11 p.m. on the 23rd or 11 a.m. on the 24th.”

High gas prices have been a major indicator of decades-high inflation this year, but reduced demand and falling oil prices have pushed gas costs down. Unleaded gas averaged $3.80 per gallon a month ago.

“The decline in gas prices bodes good news for consumers, whose wallets have been pinched this year by higher prices for nearly everything from milk to bread to eggs,” according to the Wall Street Journal. “Higher gas prices have been the biggest contributor to multidecade highs in inflation, which have propelled the Federal Reserve to aggressively raise interest rates, battering stocks and bonds alike.”

This should have major implications for the Xtrackers Russell 1000 US QARP ETF (QARP B)+, which has exposure to the above-mentioned gas companies. QARP seeks investment results that correspond generally to the performance, before fees and expenses, of the Russell 1000 2Qual/Val 5% Capped Factor Index, a multi-factor index designed to capture exposure to large-cap U.S. equities that exhibit strong quality and value factor characteristics.

The fund aims to identify companies that have strong quality scores relative to their peers and to also look at the value scores of the securities, to avoid those quality companies that are potentially overpriced. QARP has an expense ratio of 0.19%.