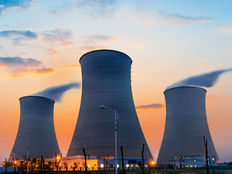 Commodities — like them or not, they’re a traditional hedge during inflation for a reason. So much uncertainty in the next year or so hinges on inflation and whether or not the Fed’s quest to bring it to heel succeeds. Until then, one of the brighter spots in commodities could be a uranium energy ETF like the Sprott Uranium Miners ETF (URNM ), which could benefit from tight supply and ongoing energy crises.

Uranium miners may be hesitant right now to drop supply into the market, instigating “voluntary supply constraints,” according to one industry commentator. The firms may be awaiting confirmation that demand for nuclear energy is ramping up in a European continent under energy pressure from Russia, and in nations around the world looking to move to renewables.

On top of these factors is the news that the U.S. government is establishing a strategic uranium reserve, which could push the price even further as its first contracts start to hit the market. The EU, meanwhile, declared earlier this year that nuclear power would count as a green investment starting in 2023. Add to that the growing stature of nuclear energy at the United Nations Conference COP27 that took place this month, and the case for uranium grows yet more.

The uranium energy ETF tracks the North Shore Global Uranium Mining Index and invests in global firms that mine, develop, and produce uranium as well as those firms that hold physical uranium or uranium royalties. Selected firms devote at least 50% of assets to business operations tied to uranium. Qualified securities are weighted at 82.5% for miners and 17.5% for holders, with weighting caps for individual issuers.

URNM charges 85 basis points for its exposures, having just hit its three-year mark this month. The ETF has added a notable $768 million in net inflows over one month, a major swing to its overall yearly flows in just the last few weeks alone.

Investors closing out the year looking at how to adapt for longer-haul inflation have a variety of options, but one that could stand out may just be energy commodities like uranium. For those investors, URNM is one of few strategies focused on the yellow metal and could be one to watch in the weeks ahead.