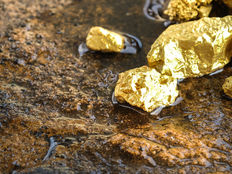 Gold Has Been Slow to the Commodities Rally

While the commodities market has rallied this year, gold exchange traded funds have shown a relatively muted reaction to inflation fears.

ETF Trends CEO Tom Lydon on CNBC argued that gold is coming up against a few headwinds.

Lydon also pointed to the commodities currently in high demand such as base metals, oil, and agricultural goods, which are doing well on the back of the global economic recovery.

“We’re also in this situation where people are increasing prices,” Lydon said. “We’re seeing it at the pumps, we’re seeing it in supermarkets as well.”

Additionally, some have also seen Bitcoin or digital currencies as an alternative hedge to gold.

With the cryptocurrency surging to record heights this year, “it’s taken a little bit of the luster out of gold,” Lydon added.

Andrew McOrmond, managing director at WallachBeth Capital, also highlighted some of the moves in the commodity and the digital currency.

“Gold’s actually caught a little bit of a rally, if you’ve noticed, in the last two weeks, really … with the correction in the cryptocurrency,” McOrmond told CNBC.

McOrmond noted that his clients remain bullish on gold.

“Our clients think that there could be a little bit of a pop here,” McOrmond said. “We’ve seen some buying.”

Looking ahead, while gold may not make another breakout move anytime soon, the precious metal could still strengthen.

Gold is “actually near an all-time high. It just doesn’t move as fast, so I think it could hit that $2,000 level pretty soon,” McOrmond added.