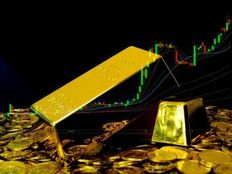 With today’s Federal Reserve meeting, gold could face pressure, however, the yellow metal’s safe haven draw was lifted by fighting words from Putin.

In a speech, the Russian President threatened to use nuclear weapons, saying “Russia will use all the instruments at its disposal to counter a threat against its territorial integrity — this is not a bluff.” The speech ended up pushing the U.S. dollar to a new 20-year high. A strong dollar is typically anathema to gold, but the yellow metal managed to hold its ground.

According to Ole Hansen, head of commodity strategy at Saxo Bank, this indicates how safe-haven demand has been crucial for gold. “Safe-haven demand has helped gold outperform other assets and not completely collapse as we see a 10% rally in the U.S. dollar and the biggest bond selloff in recent history,” Hansen said

As of the filing of this story, speculation about how big of a hike the Fed will make remains rampant. Some experts are anticipating a 100 bps hike, with others thinking that the Fed will do another round of 75 bps.

In a research note, Citi analysts said, “we expect the FOMC to deliver its third consecutive 75bp rate hike, bringing the policy stance decidedly above its estimate of the longer-run neutral level. We also look for the Committee to provide more hawkish signals through the update of its economic projections and for Chair Powell to build on his Jackson Hole message. In this sense, we see the potential for continued outflows from money managers and ETF holdings to weigh on prices moving forward.”

According to Macrotourist newsletter author Kevin Muir, “gold has been a beneficiary of the FOMC announcement — even when the Fed was hawkish. What’s even more interesting is that gold often exhibited weakness going into event. That decline bottomed on the FOMC decision.”