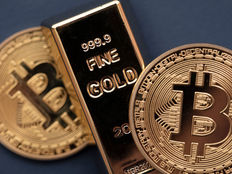 Investors are pulling out of crypto and putting their money into gold ETFs, writes gold commentator Frank Holmes for Forbes.

The week before last, investors yanked their money from Bitcoin on the heels of China’s crackdown on cryptocurrency mining and Elon Musk tweeting that he would suspend Tesla purchases that use Bitcoin, over concerns about the environmental cost of mining activity.

Gold ETFs meanwhile have seen a bump in performance over much of the same time period: over the past four weeks, the SPDR Gold Shares (GLD) and iShares Gold Trust (IAU) are up 6.9% and 7.0%, respectively.

“The Bitcoin flow picture continues to deteriorate and is pointing to continued retrenchment by institutional investors. Over the past month, Bitcoin futures markets experienced their steepest and more sustained liquidation since the Bitcoin ascent started last October,” said JP Morgan analysts in a note to clients.

Both Bitcoin and gold can serve a similar function in portfolios: they act as hedges against inflation, or at least against the fear of inflation.

The volatility around crypto has investors switching back to gold, which has a longer track record. While Dogecoin, Etherum, and Bitcoin were flailing two weeks ago, gold prices remained relatively stable.

The retreat in Bitcoin coincided with new inflows into gold. Over the past month, for example, GLD has seen net inflows of $1.5 billion.

“This suggests that institutional investors appear to be shifting away from bitcoin and back into traditional gold, reversing the trend of the previous two quarters,” wrote the JPMorgan analysts, led by Nikolaos Panigirtzoglou.

Meanwhile, economists like Steve Hanke have forecasted a gold bull “supercycle” on the horizon.

Supercycles are periods of sustained long-term growth – sometimes lasting for decades – that come off self-perpetuating high demands for commodities. Usually, the commodity will need to be in decline for many years, to the point where it is devalued. This in turn causes producers to pare down operations. When demand kicks in, there is then a struggle to provide enough supply to meet it, which sparks further demand and propels the supercycle.

Often these cycles kick off during explosions of growth as producers innovate to meet demand and take advantage of soaring prices. These innovations, in turn, inspire even more growth.

Conditions are ripe for a gold supercycle, argues Hanke, as the price for the metal is starting to pick up after many years of declining, and economies are beginning to gear up again.