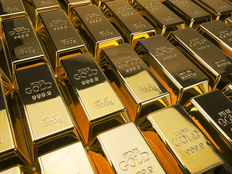 Is a Fourth Quarter Comeback Coming for Gold This Year?

The Federal Reserve has gold investors waiting on their next move to shake up the markets, and that may not come until the fourth quarter.

Gold prices have been in somewhat of a holding pattern and could push to $1,900 an ounce, according to Bank of America.

“In its latest forecast published Thursday, Bank of America expects gold prices could push to $1,900 an ounce at the end of the year,” a Kitco News article noted. “However, it expects the average price to come in around $1,800 an ounce in the final three months of the year. The fourth quarter could be the highwater mark for the precious metal as the bank sees prices gold steady at around $1,800 an ounce through the first half of next year.”

Right now, however, the market landscape isn’t conducive to an explosion in gold. The Fed isn’t expected to move on interest rates until it sees a substantial jump in inflation.

Until then, gold prices are holding steady until the markets prove otherwise.

“The global macro backdrop remains uninspiring and continues to discourage investor inflows into gold,” the analysts said. “Breakevens and nominal rates have not shown a persistent trend higher or lower in recent months and have therefore been too choppy for the gold market. To that point, real rates, usually the key driver of gold, have been on a round-trip this year, and are now trading back at the levels seen in January.”

Another Fed move the gold market is waiting on is its tapering of bond purchases.

“As the U.S. economy accelerates, inflation should pick up; with markets continuing to factor in a benign inflation outlook, any overshoot or re-pricing here could ultimately support the yellow metal. That said, the immediate focus will likely remain on tapering, so gold looks to remain unattractive to investors for now,” the analysts said. “A persistent move higher in real rates is the biggest risk to our cautious gold.”

An ETF for Physical Gold Exposure

Investors looking for ETF options in gold can look at the Sprott Physical Gold Trust PHYS. The ETF comes with an expense ratio of 0.42% attached.

“The Trusts’ precious metals are fully allocated which provides the Trusts with direct beneficial ownership,” Sprott mentioned on its website. “Unlike other bullion funds, the Trusts do not have an unallocated account that is used to facilitate transfers of bullion between financial institutions that act as authorized participants. Without exception, all of the bullion owned by the Trusts is held in the Trusts’ allocated accounts in physical form.”