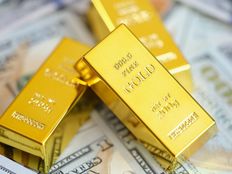 Markets Are Seeing Red, Investors Should Be Seeing Gold

Gold hit its lowest levels in two and half years as a hawkish Fed and a global central bank trend toward rate hikes and tighter monetary policy continue to dampen the yellow metal at a time when it should be thriving.

Even though gold prices have fallen more than $400 since the precious metal broke through a critical $2,000 level in March, some experts are seeing positive signs amid the noisy challenges. Independent analyst Ross Norman said, “we’ve got dollar strength and an increase in the U.S. Treasury yields, which typically would push gold lower. However, broadly speaking, gold isn’t doing too badly in the scheme of things.”

As fears of a widespread U.S. recession mount, the global marketplace started Monday in choppy waters. The dollar’s continued strength has been a headache for gold bugs, as the yuan hit 2008 lows and the British pound sterling was hit by the U.K.’s plan to sell more government bonds in a bid to better their economic growth. “Investors don’t have much appetite to hold gold in the current environment,” Warren Patterson, head of commodities strategy at ING, told CNN.

The fundamentals for gold remain strong and there are many reasons to take advantage of gold’s incredible valuations right now:

Sprott has a suite of precious metal funds that can allow advisors to make a play for a gold rebound. The Sprott Physical Gold Trust (PHYS) or the newly launched Sprott ESG Gold ETF (SESG ) hold physical gold. An equities play is possible through gold miners such as the Sprott Gold Miners ETF (SGDM B-) or the Sprott Junior Gold Miners ETF (SGDJ C+).

In other corners of the precious metal world, silver also has incredible valuations, given its industrial uses and impending shortage. Investors can get silver exposure through the Sprott Physical Silver Trust (PSLV ) and tap platinum and palladium – two precious metals that are doing well – through the Sprott Physical Platinum and Palladium Trust (SPPP).