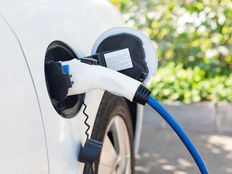 It may be surprising to know that there are virtually no new entrant U.S. electric vehicle (EV) manufacturers represented within the S-Network Electric & Future Vehicle Ecosystem Index (FUTURE). In the recent past, these stocks seemed to gain disproportionate attention in the news as low interest rates, willingness to invest in high-growth tech companies, and a push toward the energy transition contributed to a proliferation of early-stage EV companies. In 2020 and 2021, there were around 20 SPACs in the EV manufacturing segment alone (and closer to 60 in the broader future mobility space).(1) But when considering vehicle sales—most of these new entrants still do not have deliveries planned until later this year or even until 2023. Instead, vehicle sales are still dominated by companies like Tesla (TSLA) or legacy auto makers, which can be found within the FUTURE index. The index provides a view of the current EV market, while excluding those companies that do not yet significantly contribute to industry revenue. Index-linked products like ETFs can help provide a holistic look at thematic areas such as future mobility, while diversifying risk from stock selection—particularly in sectors which may include small-cap, emerging technology stocks.

While pure-play EV companies have been in the spotlight, actual production of battery electric vehicles has still been minimal (or zero) for many of these companies (see chart below). Companies like Fisker (FSR) are earning a small amount of revenue from branded apparel sales and do not plan to deliver vehicles until late 2022.(2) Others like Canoo (GOEV) have run into potential delays in production. In its most recent earnings release, GOEV stated that they were uncertain that they will hit their target of 3,000 to 6,000 this year, and more importantly, reported that there is substantial doubt the company will be able to fund itself in the future.(3) Then there are those that have started production—like Lucid Group (LCID)—but have been ramping up production very slowly. In its 4Q21 earnings release, LCID had previously cut its 2022 production from 20,000 to 12,000 to 14,000 vehicles, citing supply chain constraints and a focus on quality. But by the end of 1Q22, LCID had delivered only 360 vehicles YTD.(4)

Production delays, lack of material revenue, and high rates of cash burn have made stock picking in this segment difficult—especially for risk-averse investors who may be interested in the EV space as thematic investment. As with most small-cap emerging technology stocks, upside potential can look tempting, but may be outweighed by a chance of large downside losses. FUTURE uses a rules-based methodology which screens for companies with a market cap of at least $500 million and at least 50% of revenue derived from the EV industry (to qualify as a pure-play constituent). A company may technically qualify for the index with no revenues as a diversified constituent; however, diversified constituents are only included after either all eligible pure-play constituents are selected or 100 pure-play constituents are selected. (See here for full details on index methodology.) Besides Tesla (TSLA) none of these pure-play EV companies are currently in the FUTURE index given small market cap, no material EV revenues, or a combination of both.


Despite production delays among new entrants, there has been overall positive market growth driven by traditional auto makers, which have been investing more capital into expanding their EV production goals. In 1Q22, battery electric vehicle (BEV) registrations in the U.S. grew to 4.6% of total vehicles sales, according to Experian.(5) U.S. BEV sales are mostly attributed to Tesla (which held over 75% of BEV market in 1Q22). The remaining sales come from traditional automakers like Kia (000270 KS), Ford (F), and Hyundai (005380 KS)—although each currently has a market share closer to 4-5%. While these automakers have been making hybrids, plug-ins, and other alternative fuel vehicles for many years, BEVs are relatively new and more difficult to ramp production, especially with recent constraints of batteries and semiconductors. Toyota (7203 JP, 4.6% index weight), which is the largest traditional global auto manufacturer, has been a leader in alternative fuel vehicles (with over 50% market share), but until recently had been reluctant to build a significant share in BEVs. In FY2022, electric vehicles made up 28.4% of its total retail vehicle sales by volume compared to 23.7% in the previous year. BEVs, however, were only about 0.2% of vehicle sales (16,000 units). The company forecasts 95,000 BEVs sold next year as part of its target of 3.5 million units a year by 2030—a 4 trillion yen ($35 billion) planned investment.(6)


Currently, the electric vehicle industry is still in its early stages with very few new entrant EV companies likely able to penetrate the market within the next year. Instead, vehicle sales are driven by companies like Tesla and legacy auto manufacturers, which are currently investing capital to expand and grow market share. In our next EV note, we will look at the remaining segments of the index, which include semiconductors, batteries, and other enabling technologies.